The frag grenade is a thrown explosive in Fallout: New Vegas.

The standard thrown explosive device used by militaries worldwide before the Great War, the frag grenade causes a lethal blast sending metal shrapnel flying in all directions up to 35 meters. Useful against groups of unarmored enemies, or for hitting enemies around corners by banking grenades off walls. To throw the frag grenade, simply press the Fire button, the longer it is held the farther the grenade will go. The arc at which the player is throwing it is also a major factor for determining the distance it will travel and land. 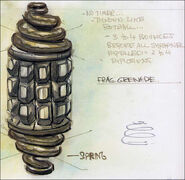