A frag grenade is a thrown explosive in Fallout 3.

Frag grenades are standard grenades creating an explosive blast and dealing significant damage, with a high chance to cripple limbs. They are commonly used by melee-equipped raiders and super mutants when they are out of melee range.

Thrown grenades are affected by physics, they may bounce or roll unexpectedly if not thrown carefully. However, in-game physics can also be used to an advantage, such as throwing grenades through doorways or bouncing them around corners to ambush enemies out of sight.

Grenades are an optional target in V.A.T.S., and can even be shot out of the air, causing them to detonate. This can be used to an advantage, as they will deal damage to an enemy if they are holding them or in close proximity when they explode. Grenades can be thrown point-blank in V.A.T.S with less danger due to the fact that the player character only takes 10% of the damage in V.A.T.S. they would take when outside V.A.T.S. Additionally, throwing grenades with V.A.T.S. and subsequently landing a successful hit will cause the grenade to explode right at the target's feet, making V.A.T.S. the most efficient way to use grenades to best effect (unless throwing it around a corner or through a hole in the floor/ceiling).

A grenade that has been thrown toward the player character will show up on the HUD as a red arrow denoting its direction relative to current position. Move in the opposite direction as quickly as possible to escape the blast radius and minimize the damage to both overall health and limbs.

One guaranteed grenade, 75% chance to spawn up to six:

The frag grenade does not appear to expel any fragments; the damage radius also supports this. It seems that the frag grenade works more like a concussion grenade.

The blast of a frag grenade 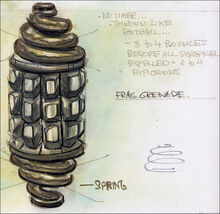