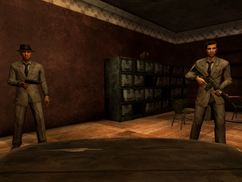 “All I can tell you is to find Cachino. He's the lowest level Lieutenant you're going to be able to talk to. Some of the girls say he's been involved in some shady business the Family wouldn't really like. Ask him about it.”— Gomorrah receptionist

How Little We Know is a side quest in Fallout: New Vegas.

Warning: It is tricky to avoid permanently locking options in this quest. It is best taken after completing Bye Bye Love, as completing this quest will render Bye Bye Love either unobtainable or unable to be completed. Also, If the Courier does not speak to Liza O'Malley before starting How Little We Know, they will not be able to complete For the Republic, Part 2; see Bugs below. Finally, completing this quest incorrectly prevents the player character from acquiring the Pimp-Boy 3 Billion.

This quest can be given by Mick at Mick & Ralph's after asking him for work. He mentions that the Omertas have stopped buying guns from him without a word as to why. This quest can also be activated after talking to Yes Man. If the Courier is going to do the Wild Card quests, make sure to ask him about the Omertas, so that new speech options progress the quest when exploring Gomorrah. Otherwise, the Courier will have to return to Yes Man and opt to ignore the Omertas, if they've given up finding clues.

In For the Republic, Part 2, the Courier will be asked to get some information regarding the Omertas by Colonel Moore. She will then tell the Courier to talk to Liza O'Malley to start this quest. The Courier can also automatically receive this quest upon accepting The House Always Wins IV from Mr. House.

Once the quest starts, the Courier can talk to the receptionist in the main entrance of Gomorrah. If she has a Speech option for the Courier to ask her information about "the outstanding balance," she can point the Courier to Cachino, a low-level lieutenant. The Courier can ask a few of the dealers/bouncers/hookers for Cachino's whereabouts. They will be unfriendly to this and not answer, but Cachino will still turn up after this. Having the Confirmed Bachelor and/or Terrifying Presence perks gives the Courier additional speech options for the same result.

The Courier's inquiries will prompt Cachino to approach them when they enter the Brimstone club. Once the Courier meets him, they need to find proof of Cachino's work he's been pulling on the side. The Family does not know about this work because it goes against Omerta rules, putting his life at risk if it ever gets out. There is a journal in his desk directly to the left as the Courier enters the bedroom of his suite, and another on his person that can be pickpocketed; this is the evidence needed.

The Courier can get the key to his suite from the receptionist either by paying 300 caps, passing a 8 Strength check (making it free of charge,) or passing a 55 Barter check which lowers the bribe to 200 caps. (The Courier can pay her the 300 caps, then pickpocket her to get it back.) Alternatively, the Courier can just pickpocket Cachino since he is carrying a copy of the journal.

Once the Courier confronts Cachino with his journal, he will give them 100 caps to get the journal back; a 60 Barter check makes him give the Courier an additional 200 caps. He tells the Courier about two people in the club who were hired by the bosses as part of their plans and says to talk to Clanden and Troike about specifics.

Take the elevator to the suites level to find Clanden. He will not give the Courier any clues or talk with them about what he does at all, even if the Courier mentions that Cachino sent them. If the Courier goes back and speaks to Cachino, he will mention he did some asking around and the bosses' plans would be screwed if Clanden was not around, so he asks the Courier to kill Clanden discreetly. Alternatively, the Courier can steal Clanden's key off him, which opens a safe behind the dresser next to his bed, or they can just pick the safe's lock if they have at least 75 Lockpick skill. Inside the safe are the snuff tapes.

His room key that unlocks the safe also unlocks the door to the 100 Lockpick maintenance room (on the same suite level to the west). Inside is a hooker's corpse, which the Courier can inspect with 35 Medicine.

Troike is found in the lower Brimstone level. When talking to him, the Courier can choose a 30 Medicine check, saying that the story he tells the Courier about blacking out does not make sense. The Courier can find evidence of foul play by looking for the blackmail note in a safe in Big Sal's office that proves the bosses set Troike up. However, if the Courier picks up the note, they will NOT be able to free Troike from his contract. This makes it impossible to legitimately obtain the Pimp-Boy 3 Billion. Alternatively, the Courier can talk to Big Sal and convince him to free Troike from his contract with a high enough Speech (53) or Barter (45) skill. This frees Troike without having to investigate the dead hooker incident or find any evidence. If the Courier has a Speech skill of 80, the Courier can lie to Troike (resulting in bad Karma) and mention to him they will tell the NCR of his dealing, bypassing the hooker investigation and talking to Big Sal.

Once Troike has been freed of his contract, he will cooperate and tell the Courier about his involvement with the Omertas. He will tell the Courier he was smuggling guns in NCR supply shipments and they can discuss destroying the guns. Troike will give the Courier a key and some thermite to destroy the guns the Omertas have been gathering for their secret plans; with 70 Speech, the Courier can tell him to plant the thermite himself. The guns are behind a unique door in the hotel, with two footlockers containing a random assortment of flamers, sniper rifles, and assault carbines (these might help later in the next part of the quest). Place the thermite on the four crates of weapons and set off the detonator via the now active panel in the hallway near the closest door to the room. If Troike plants the thermite himself, he will get caught and rat the Courier out before the Omertas kill him, but this will not ruin any of the objectives.

After the Courier speaks to Cachino upon completion of both objectives, Cachino will tell the Courier that Big Sal and Nero need to be killed now. Luckily, they just put him in charge of finding out who is responsible for ruining their plans, and he will lead the Courier to a small room where the two bosses are. It is possible to convince Cachino to wait for their initiation signal with a Speech of 80 before the assassination. If the Courier did not get the guns from the room before they used the thermite, the Courier can use the sawed-off shotgun Cachino gives to them to kill the bosses, or the Courier could use the holdout weapons they might have smuggled into the casino.

Upon entering the room, the bosses will ask the Courier to have a seat, and a conversation will begin. They talk about how they know the Courier has been ruining their plans and how they want to kill the Courier. At any point in the conversation, the Courier can start combat through a dialogue option, but it is possible with a 80 Speech check to have Big Sal explain the whole plan to them, then the Courier can lie and convince him that Nero wanted him dead. This results in Big Sal killing Nero when combat starts, allowing time for the Courier and Cachino to kill Big Sal. If the Courier wants to avoid combat, they can quickly loot the office key from Big Sal and run outside. The various Omerta thugs in the casino will kindly assist the Courier with killing Nero.

The quest is complete when the bosses are dead. Cachino takes over the casino, earning the Courier Strip fame. If the Courier speaks to him after the fight, he will give them 50 Gomorrah chips.

If the Courier informs the guard at the entrance to the Gomorrah club that they have proof that one of the Omertas is dealing on the side, he will let the Courier in to see the bosses. Note that the Courier can only do this after they have informed Cachino they have his journal and have decided to keep it. The Courier can talk to Big Sal and offer him Cachino's journal for 100 or 200 caps if the player character succeeds in a Barter check (60). After that, everyone is brought into Big Sal's office for a meeting where a Button man will kill Cachino after he begs for his life. Talk to Big Sal afterward; he will ask the Courier to take over for Cachino, then offer the Courier a job aiding Clanden and Troike in their plans.

For Clanden, it means helping him kill "a large amount of people in a short amount of time". If the player character has a high enough Science skill (60), they can correctly guess Clanden wants to make a chlorine bomb; otherwise Clanden will tell them what is needed. Containers of chlorine can be stolen from the Ultra-Luxe casino or purchased from either Ralph in Freeside or Blake at the Crimson Caravan Company. The chlorine from the Ultra-Luxe is found in a small supply closet with an Easy lock on it, in the area behind Mortimer's counter. The Courier can also persuade Ralph to give them chlorine for free by passing a Science check of 60, but no such option exists for Blake.

Troike will tell the Courier he is a gun smuggler and inform them that he needs someone to retrieve a crate of guns stolen by the Fiends. The location will be marked on the Pip-Boy's map, guarded by 3 Fiends. Once the Courier retrieves the disassembled weapons shipment, return to Troike.

Once the chlorine is given to Clanden and the weapons to Troike, the Courier will then be told to see Big Sal. Upon informing Big Sal of having fulfilled his request to aid Clanden and Troike, he rewards the Courier with 400 caps. The Courier can also speak to him about 50 Gomorrah chips. Choosing this solution will cause one to gain infamy with the New Vegas Strip, and during the Wild Card: Side Bets quest, a dialogue option will appear when talking to Yes Man saying that the player character supports the Omerta's plans of attacking and taking over the Strip.

Safe in the bedroom