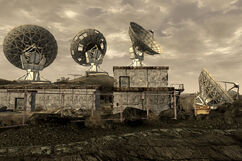 “Exceptional individuals, like yourself, are sometimes allowed to join the Brotherhood if they perform a valuable service for it.”— Elder McNamara

Eyesight to the Blind is a side quest in Fallout: New Vegas.

This quest can only be started if one has completed the quest Still in the Dark for the Brotherhood of Steel. The player character then has the option to ask Elder McNamara to join the Brotherhood. Elder McNamara will tell them that though outsiders cannot normally join the Brotherhood, membership has been bestowed upon those who complete a heroic act in the name of the Brotherhood. He then informs them that he does have a specific act in mind; install the remote signal transmitter in the radio station atop Black Mountain, controlled by hostile super mutants under the rule of Tabitha. Accepting his request will activate this quest.

Reaching the peak of Black Mountain and entering the broadcast building will bring one in the path of several super mutants guarding the winding pathway up the mountain.

At this point, the player character must activate the main broadcast control board, and plant the signal transmitter.

Once the remote signal transmitter has been planted, one must return to Elder McNamara and inform him of their success. They are then immediately inducted into the Brotherhood of Steel and given a suit of T-45d power armor and a matching helmet. If one does not have the Power Armor Training perk, Elder McNamara teaches them how to use power armor.