The Whitespring Resort is a location in the Forest region of Appalachia in 2102. It is part of the larger area called the Whitespring.

Built in 1858, named after a natural sulphur spring on the grounds,[1] the Whitespring Resort offered a wide array of shops, dining, and “exciting sporting opportunities for distinguished Ladies and Gentlemen."[2] Even after the Great War, explorers of Appalachia can still use several amenities provided by the resort, most notably the Ironclad Service security system and vendor robots.

In May of 2075, the Whitespring 2080 Initiative was announced. This major five-year renovation included The Homesteads, The Springhill, the Ironclad Service and Modern Heritage projects, as well as enhanced business class facilities and events. The Ironclad Service was replacing all security and groundskeeping staff,[3] while the Modern Heritage renovations were responsible for locking down the hotel from January of 2079 until May of 2086.[4] The resort's staff reacted negatively to the Ironclad Service, causing many to leave or plan to leave for new jobs. The Ironclad Service subsequently became a public relations nightmare in which the Charleston Herald depicted the resort's management as another big corporation's reliance on robots over a human workforce. Furthermore, the Homesteads project, which was a financial linchpin of the Initiative, failed to raise the desired revenue to prop up the capital improvement loans for the Initiative.[5]

When the Great War began, nearly all of the staff and guests fled the resort. Only four staff, ninety-two guests and along with five hundred robots remained at the resort. Joyce Easton, a clerk who was manning the Candy Shoppe counter at the time, was chosen by the remaining staff to take charge of the resort, becoming the "Acting Assistant Manager."[6] The survivors made it through the radioactive fallout and were stocked with supplies that would last for a decade. However, their stay was forcibly ended when the automated Modern Heritage renovations were activated in December 2078 and the resort's robots locked the survivors out from their rooms. After failing to override the renovations, nearly all the survivors realized that there was no point in staying and prepared to celebrate their last New Year's Gala at the resort before leaving for the outside world.[7] A few of the survivors chose to try overpowering the robots at the Whitespring golf club rather than leave the resort.[8] They succeeded but were eventually wiped out by feral ghouls which attacked the golf club.[9]

When walking in the front entrance, going down the stairs will lead to the lower lobby. Walking forward will lead to the general manager's office. To the left of the lower lobby is the security station, concierge and registration. Going down the hallway there will lead to the Whitespring Theater, and further down will lead to a small lobby, two elevators and a stairwell. Back to the lower lobby, to the opposite side of the lobby, is the bellstand and a long hallway with shops. The shops in order down the hallway are The Chemists, The Newsstand, Live Chic, Creekside Lodge, Bespoke, Captain Kids, Le Grand Gourmet, Black Powder, Elegance, The Whitespring Spa, Artisan' Corner, Aurum and Studio 58. At the end of the hallway is a small lobby with the north entrance, the unoccupied the Candy Shoppe, and two elevators.

The retail shops contain vendors from every faction in Appalachia.

From the front entrance, go up the stairs, where there will be an "upper lobby." To the right will be a series of rooms. Going down the hall, there will be the lobby bar, a small lobby, the soda fountain and at the end a parlor with two elevators leading to the lobby with the Candy Shoppe. Back in the "upper lobby," on the opposite side, is the dining room. Going down the hallway near the dining room will lead to the ballrooms. At the end of the hallway will be elevators and stairs leading up to the third floor.

Not much is found on the small third floor. The only notable object is a hand scanner on the wall which reveals a hidden hall leading into the Whitespring bunker. This hand scanner is only accessible once the player character has completed One of Us.

The Whitespring Resort appears only in Fallout 76. 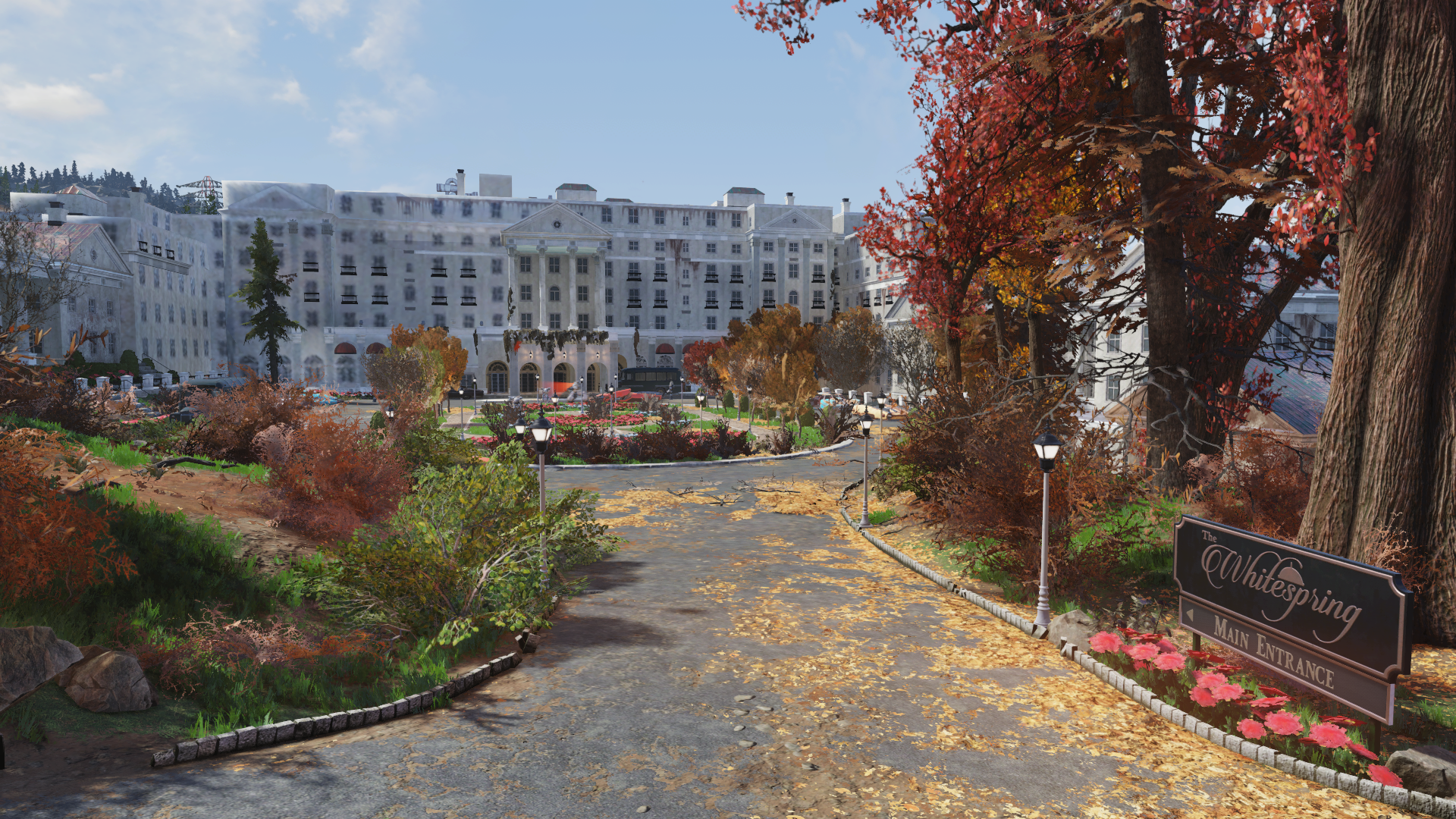 Golf course, with Charleston visible in the background 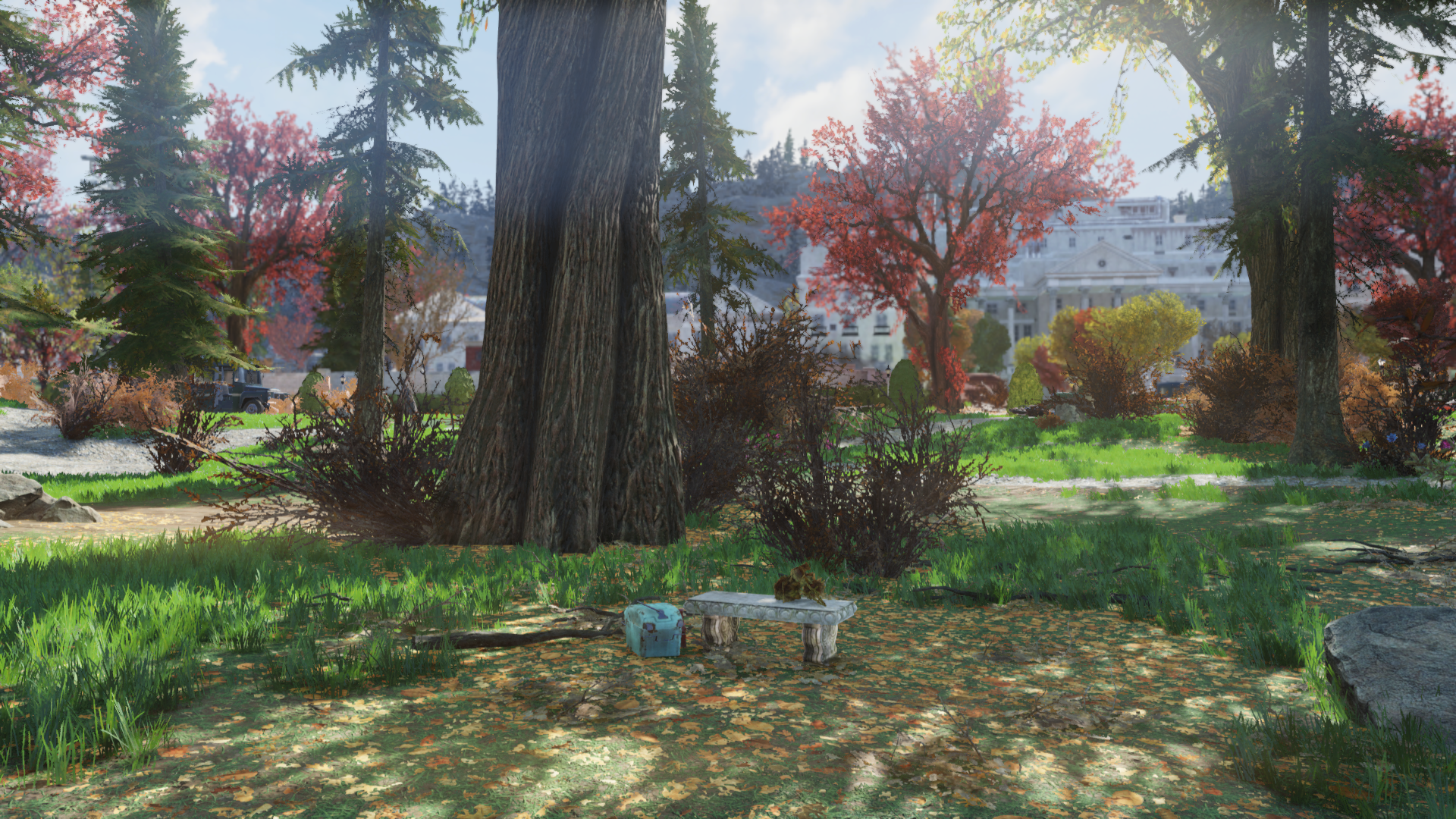 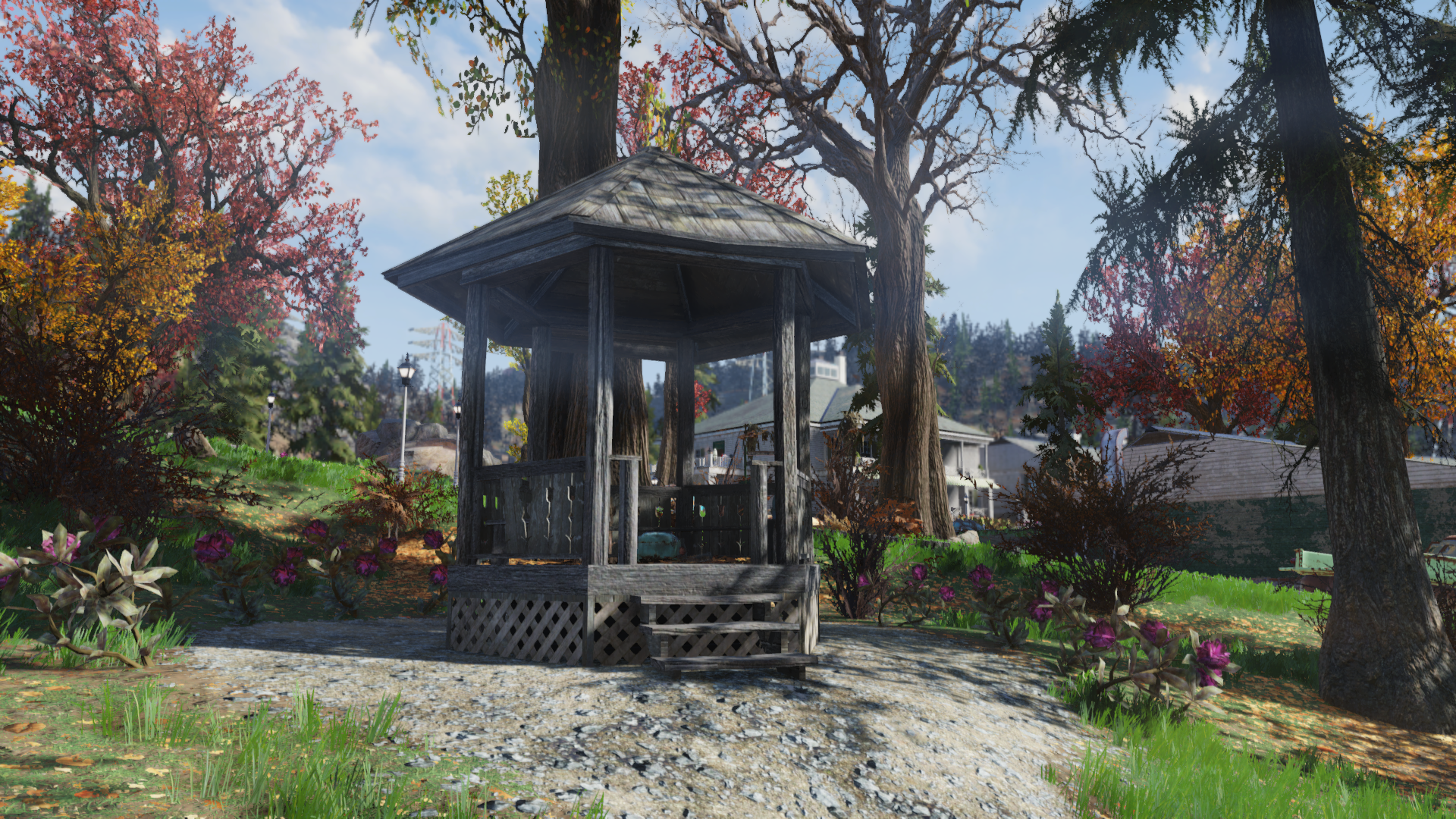 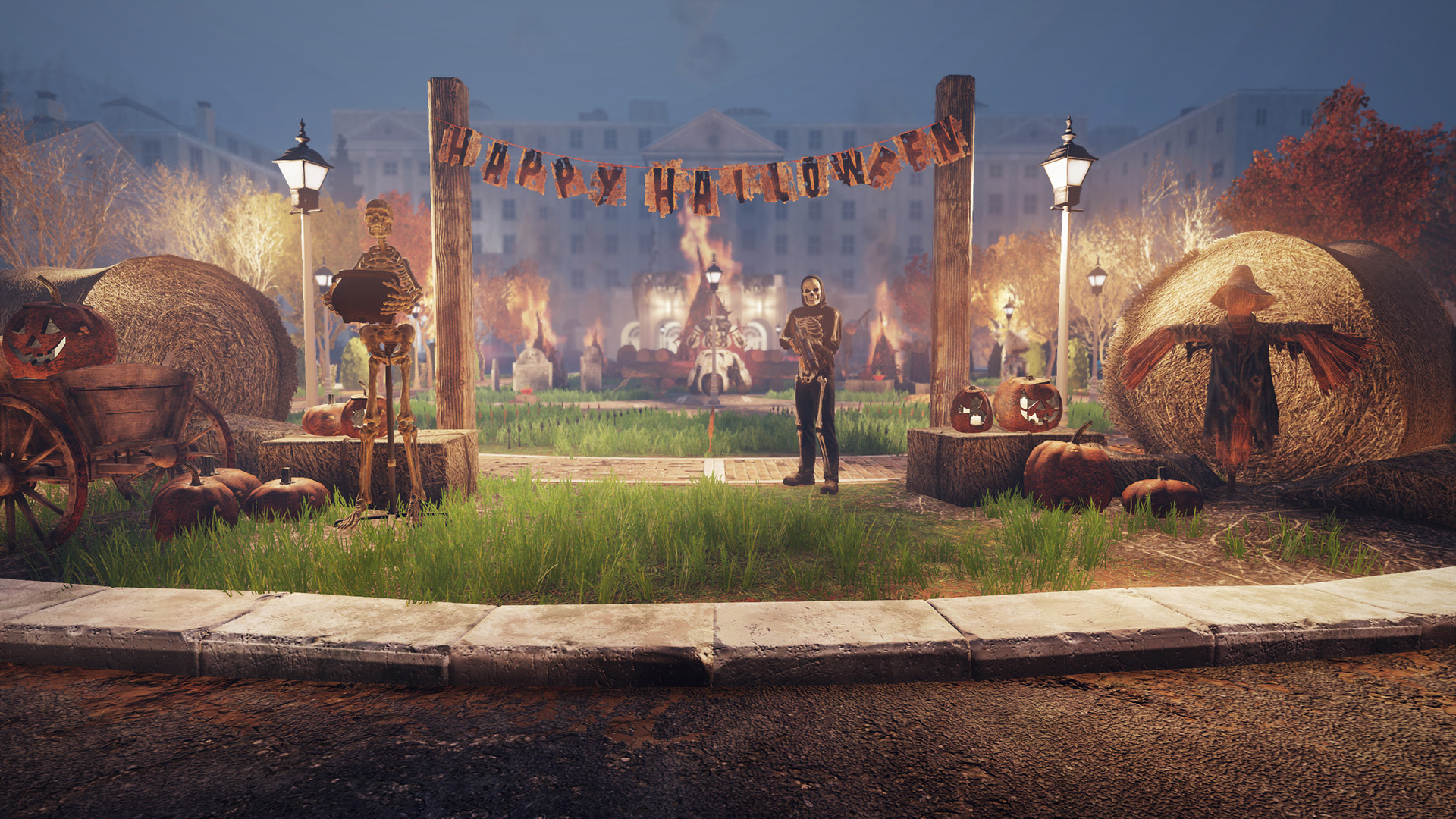 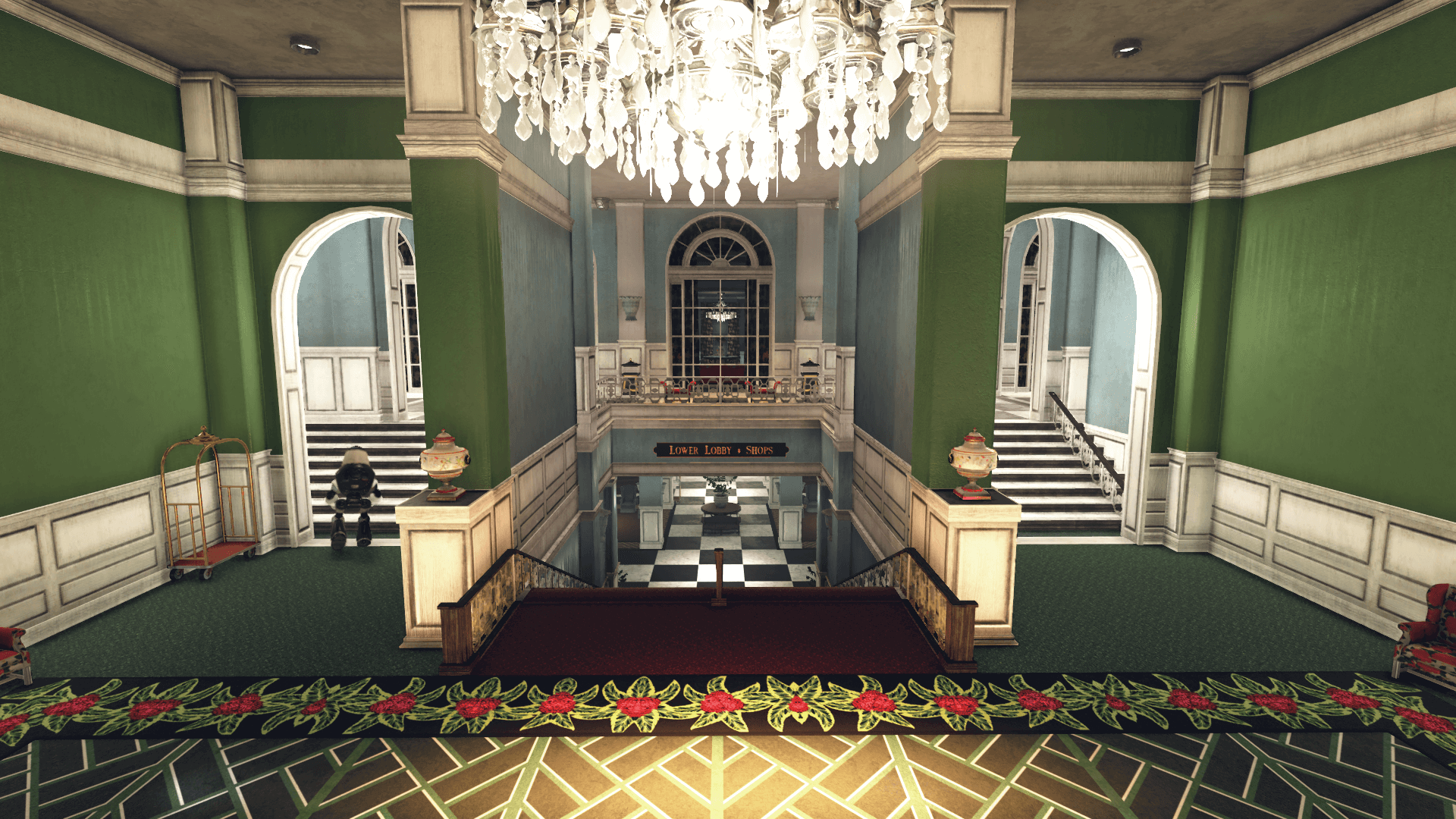 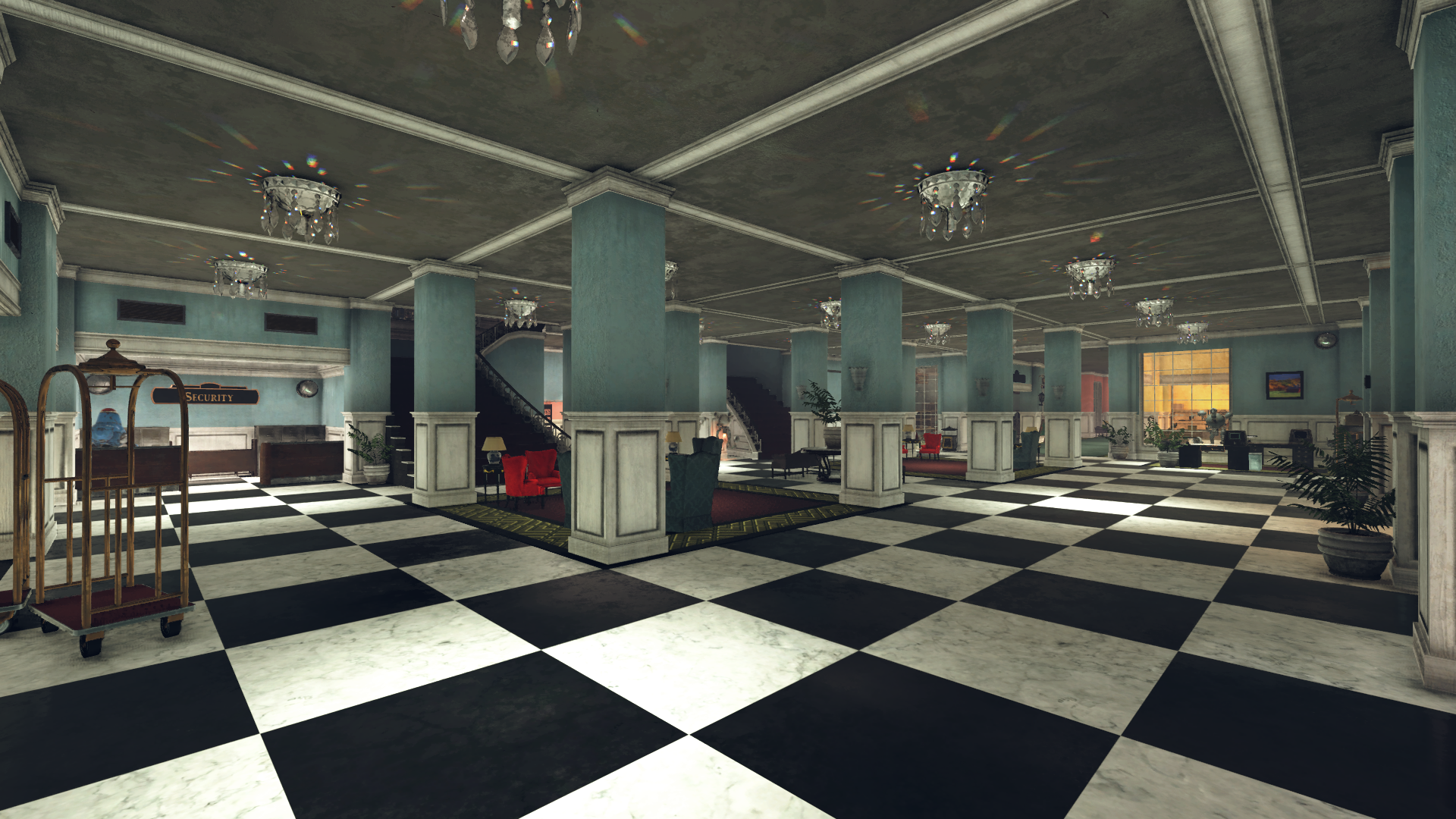 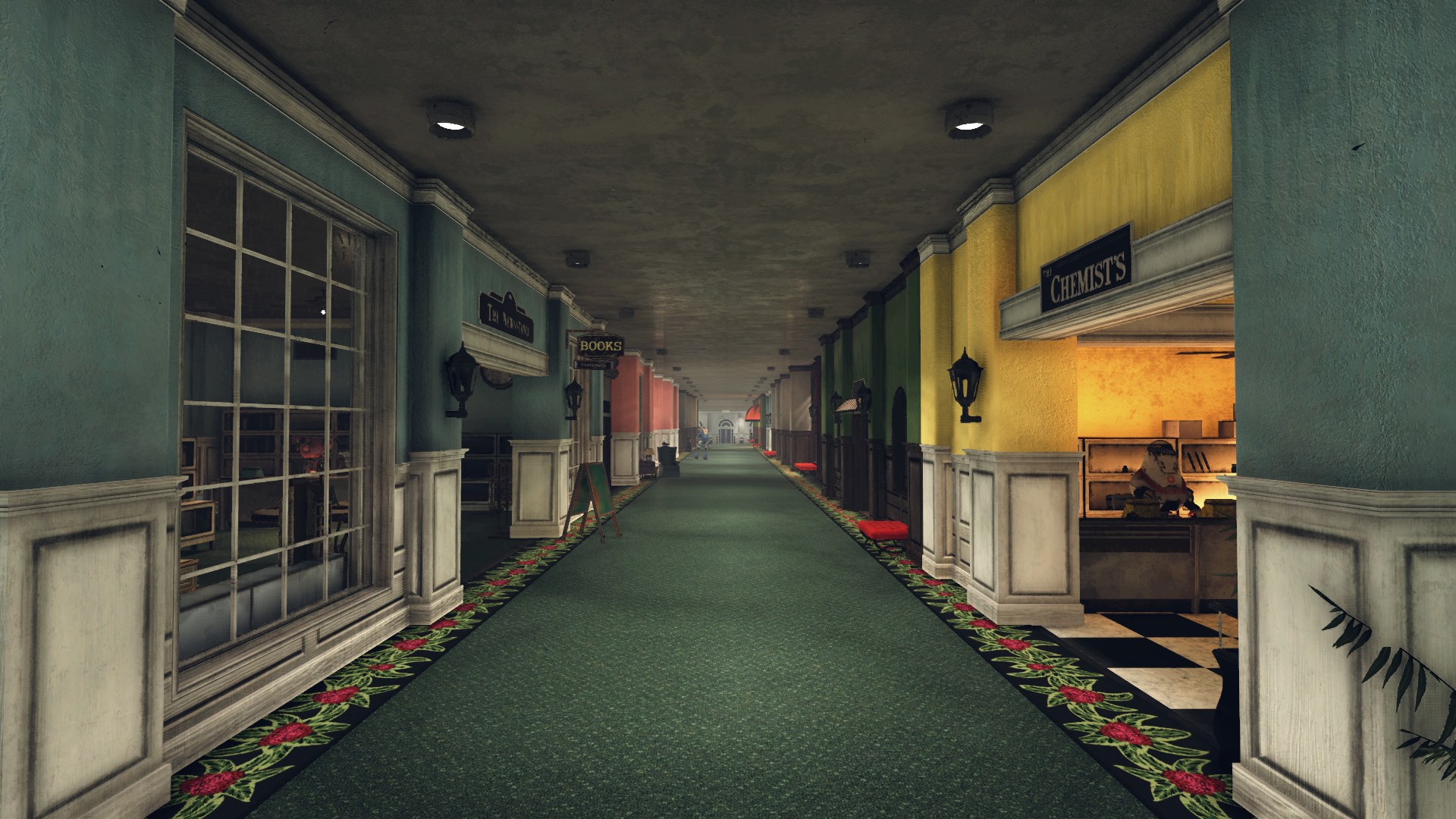 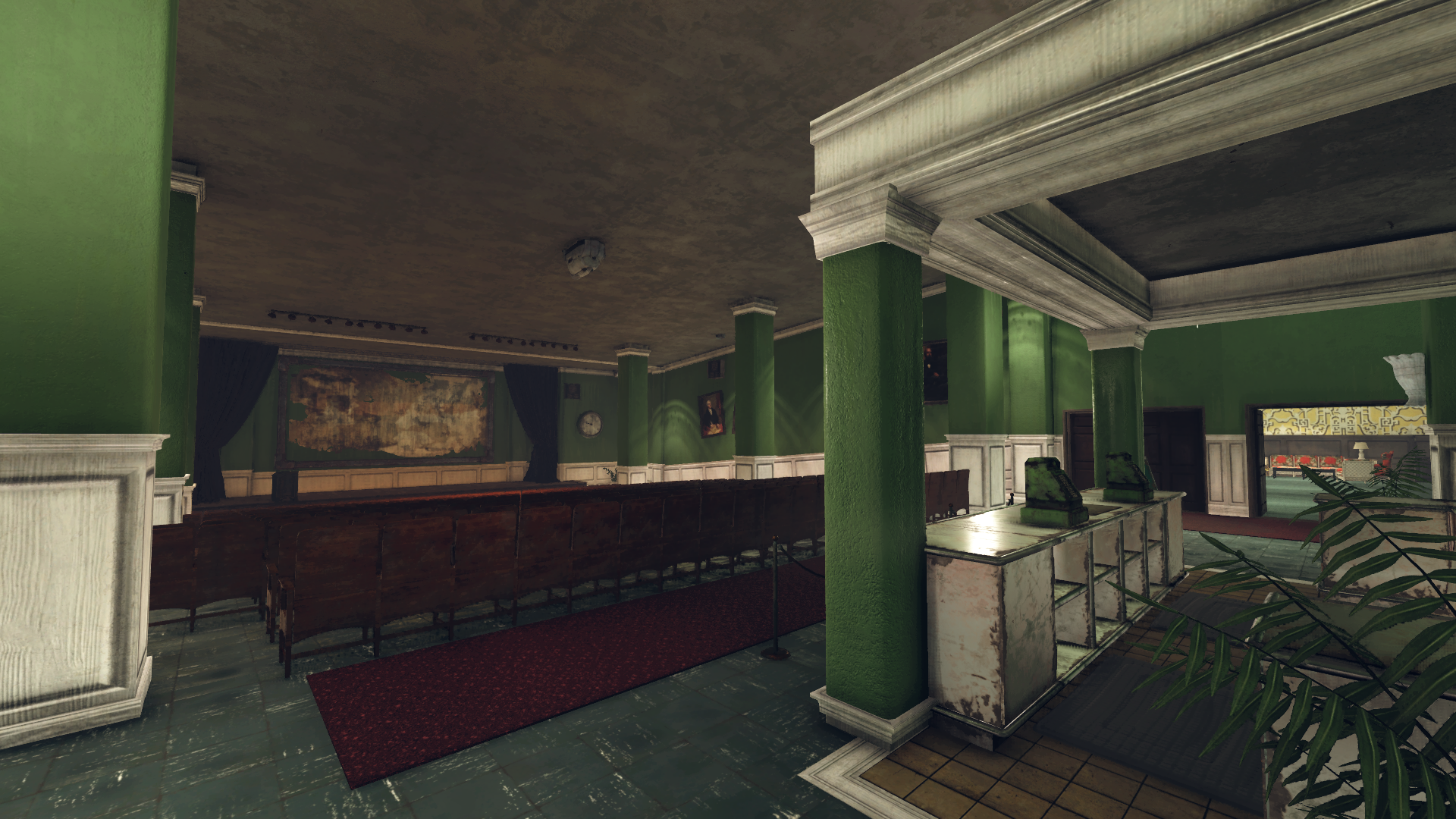 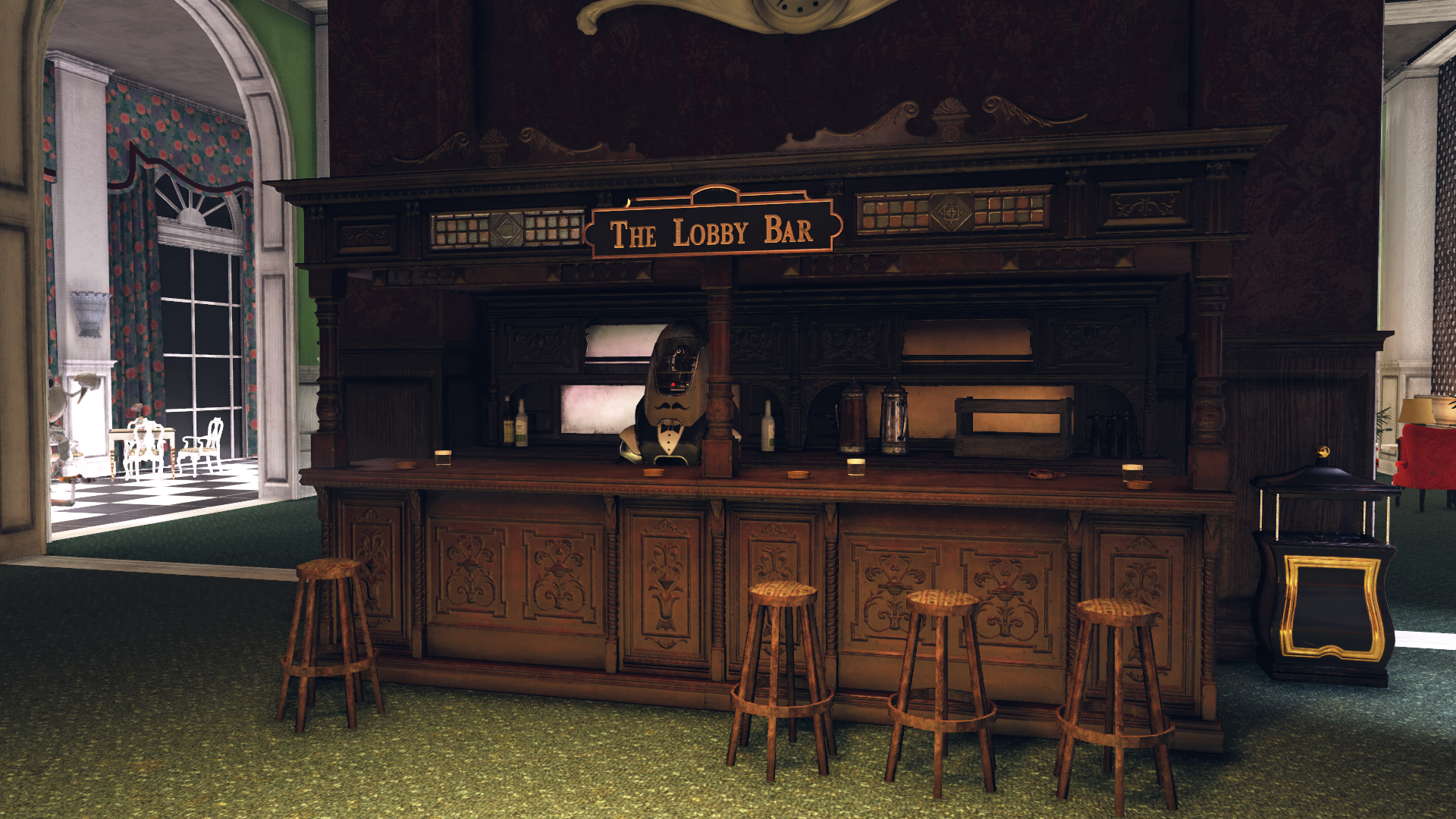 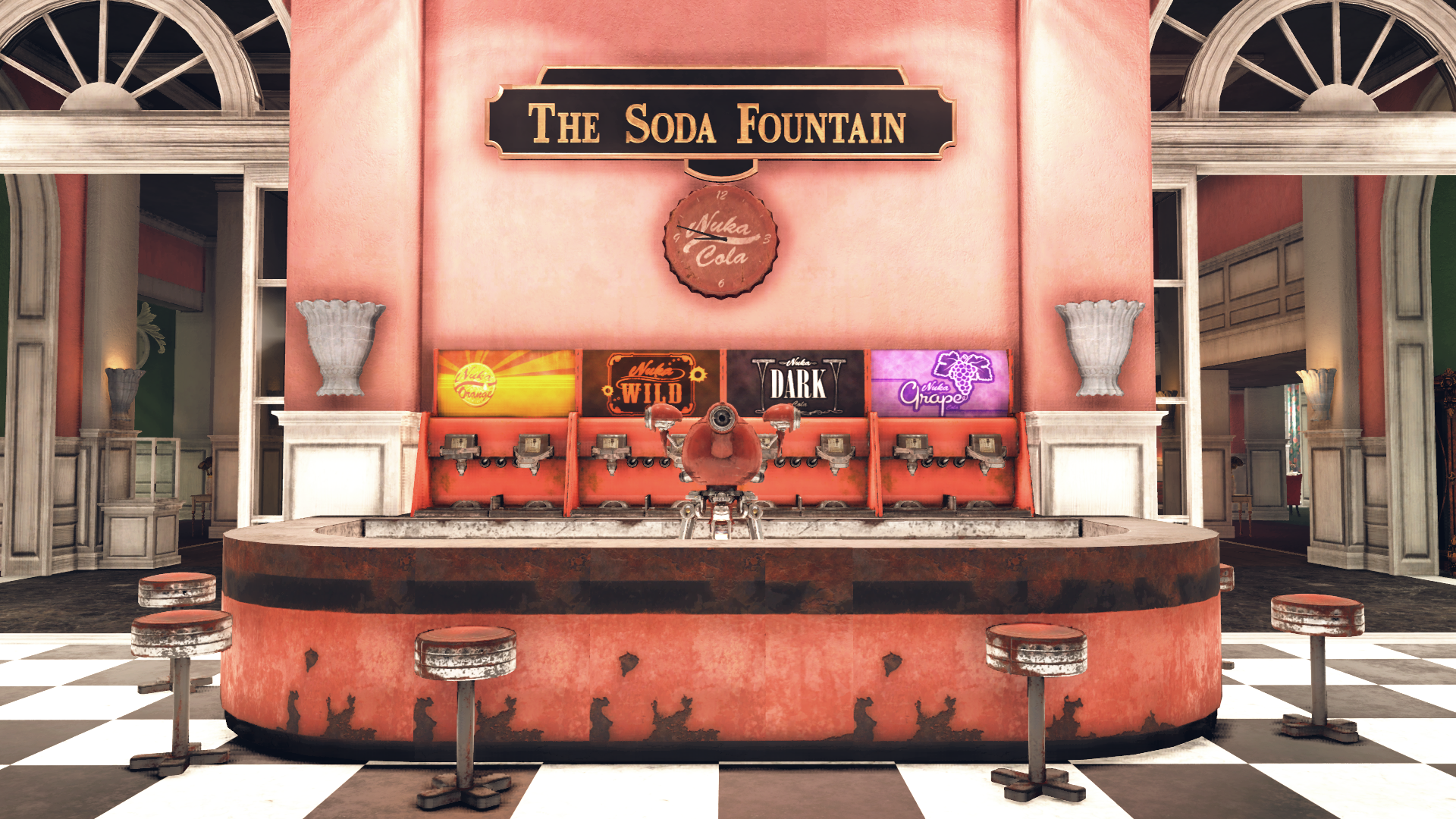 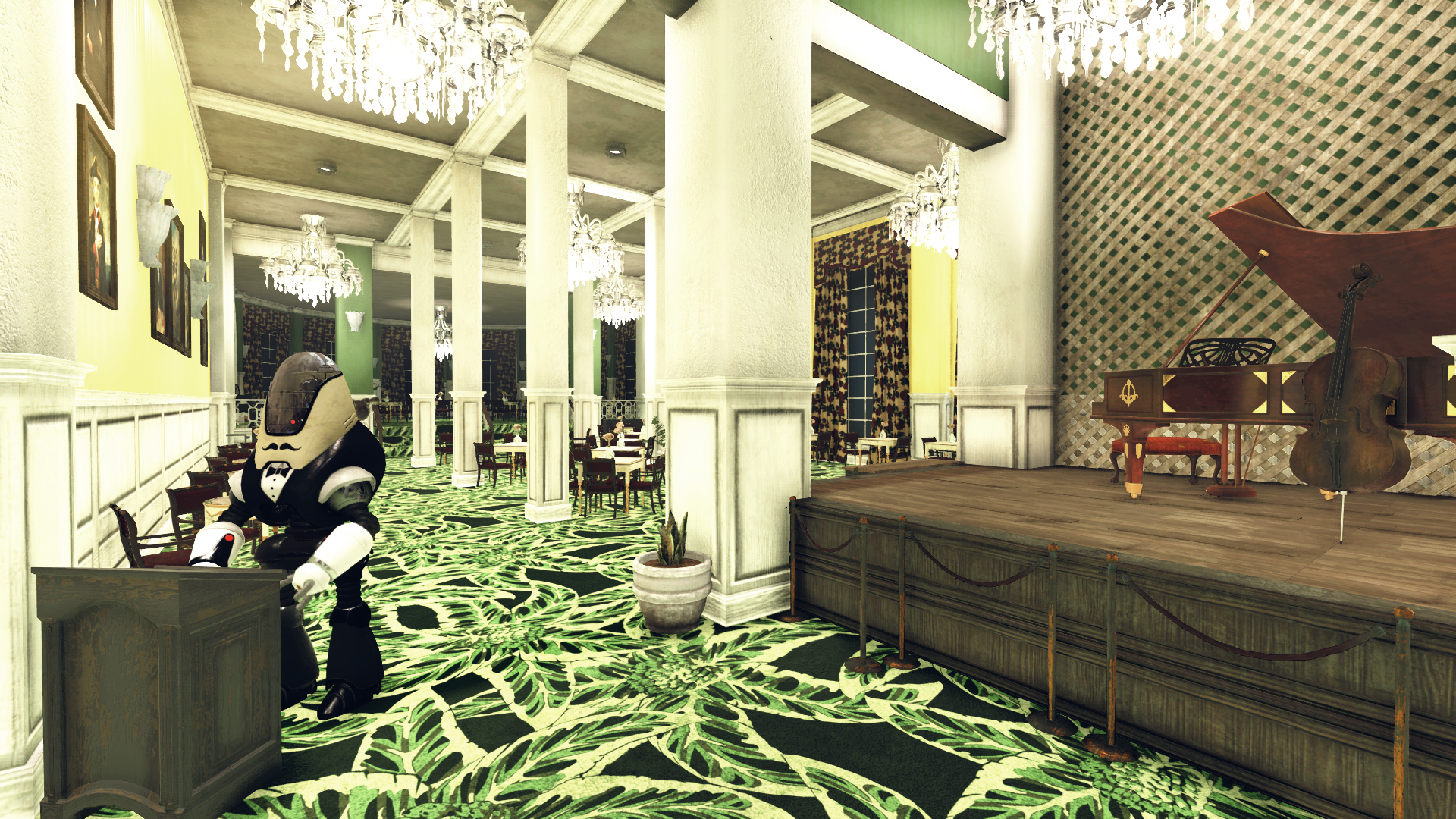 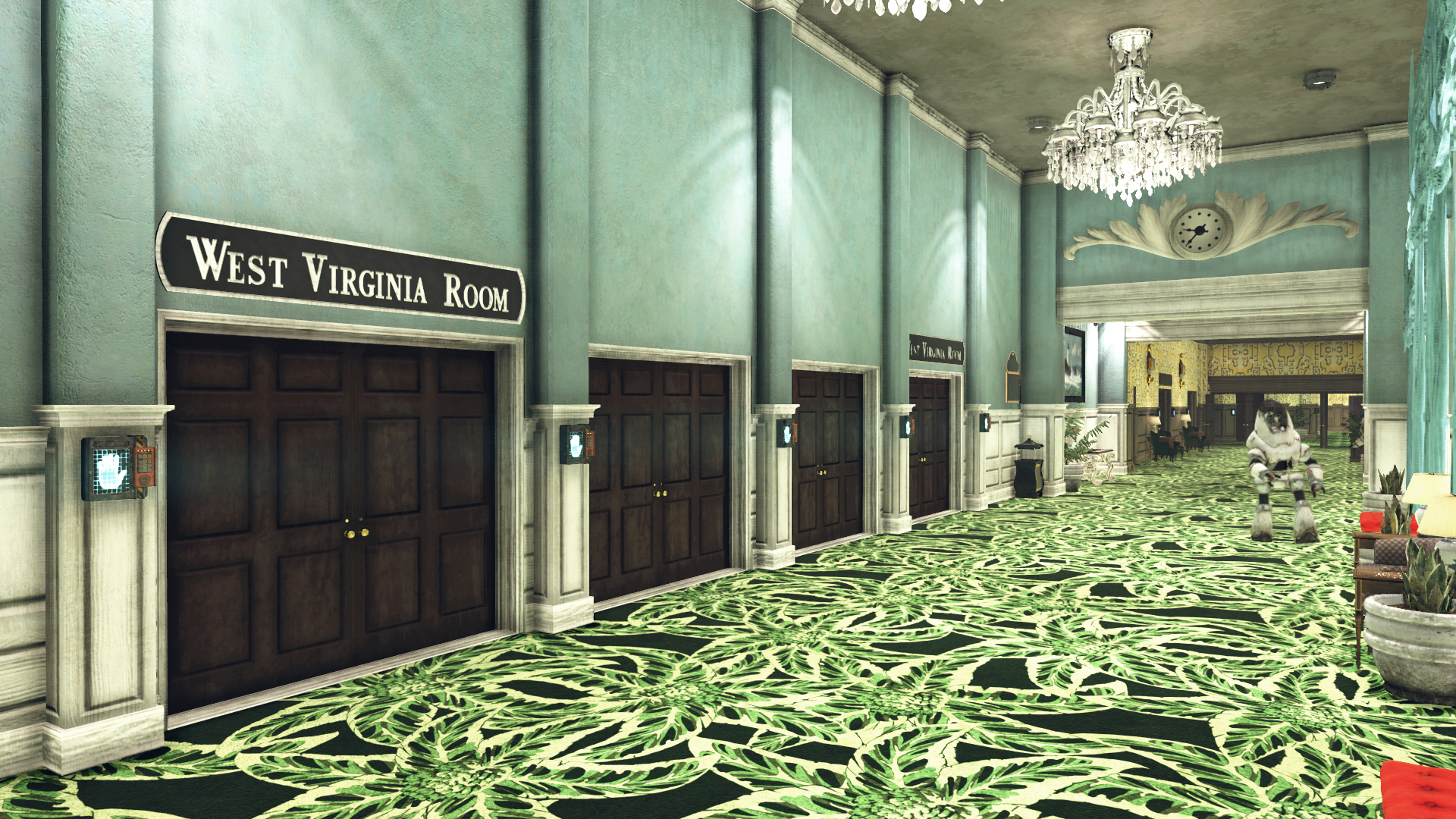 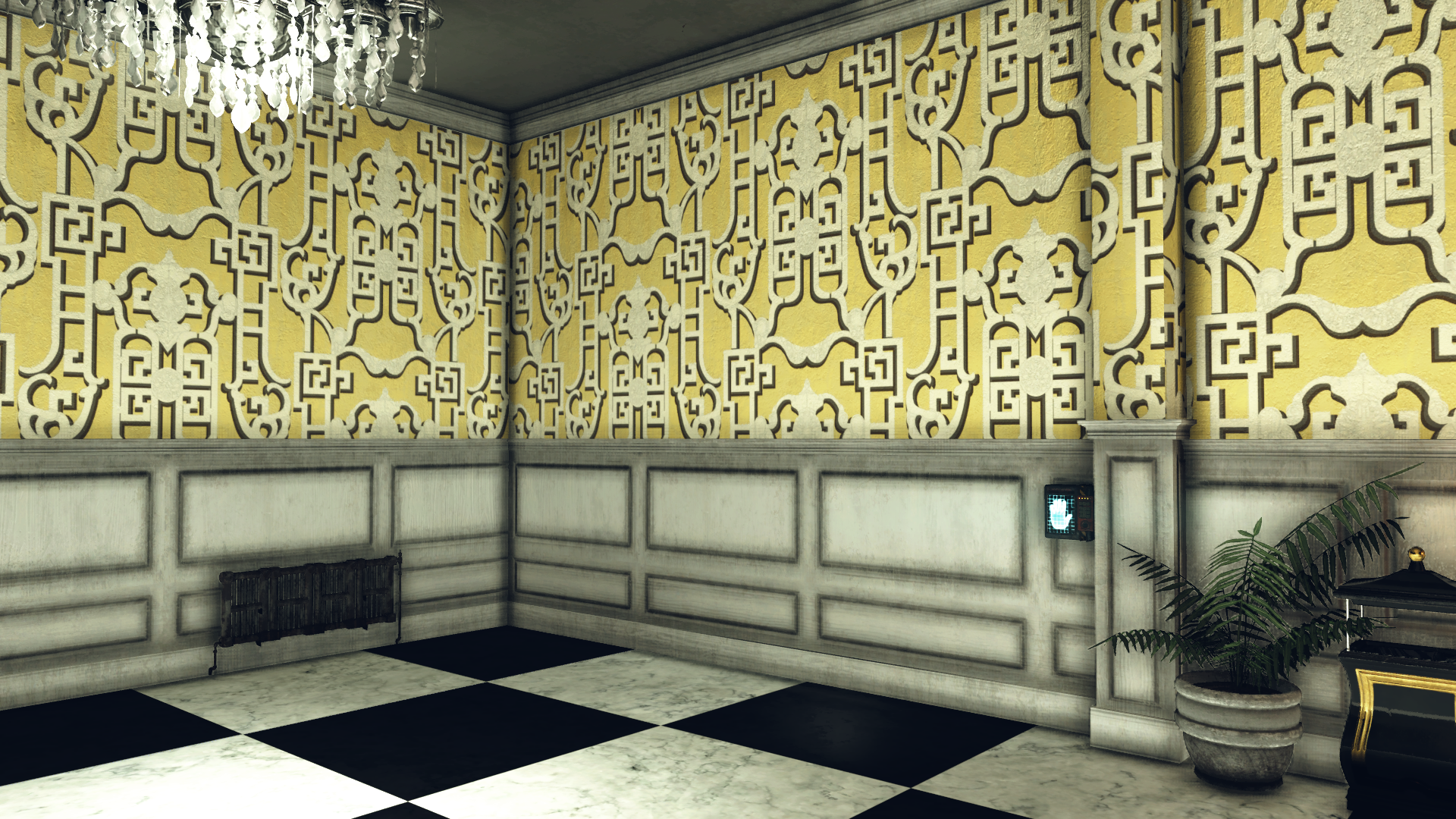