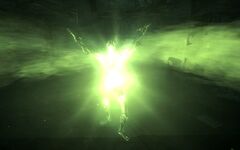 Glowing ones or luminous necrotic post-humans are ghouls who have absorbed so much radiation that they literally glow with its excesses. They have become living conduits of radiation to the point that radiation not only heals their combat injuries, but can be forcibly released from their bodies. They are most often considered outsiders, even by other ghouls. Glowing ones also emit radiation involuntarily, so they can still be dangerous to normal humans after their death.

Even more deadly in Fallout 4, a glowing one is not only stronger than a normal feral ghoul, but its radiation burst is able to heal and even reanimate nearby feral counterparts.

While there are many glowing ones that kept their normal human intellectual abilities in New California, it seems that nearly all of them in the Capital Wasteland, Mojave Wasteland and the Commonwealth have become feral. Two known exceptions are Jason Bright at the REPCONN test site and Oswald Oppenheimer at Nuka-World.

The Capital Wasteland glowing ones can emit a wave of radiation at will from their bodies, which they use to heal themselves and any surrounding feral ghouls while damaging their enemies. They are the alphas of the feral ghouls and others seem to follow them, as they are attracted to the lethal doses of radiation the glowing ones emit from their bodies.

In the ghoul settlement of Necropolis in New California, the glowing ones lived in the remains of Vault 12, and there was an animosity between them and the "normal" ghouls led by Set, who inhabited the ruins of the town. After Necropolis was overrun by the super mutants, the glowing ones who left the town lived much more harmoniously with the other ghouls (not to mention normal humans and super mutants).

There appear to be several glowing ones in the nuclear plant in Gecko, working in the reactor area, such as Hank. If the Chosen One fixes the reactor's radiation leak, the ghouls in the plant (not just the glowing ones), will comment on how the plant feels "chilly."

In the Underworld, the doctor of The Chop Shop seems to be using glowing ones as a method to heal the resident ghoul population. He has two of them, Meat and Ethyl, locked in a pen next to the clinic. They cannot be visited without the use of console commands.

Sentient glowing ones (non-feral glowing ghouls) are a rare unique variety of sentient ghouls. Unlike their feral counterparts, they are able to keep some forms of consciousness. Glowing ones like Sun of Atom and Ethyl are non-hostile to the player character but have lost their ability to communicate and visually appear similar to their feral counterparts. Ghouls like Hank, Jason Bright and Oswald the Outrageous have managed to be able to keep their ability to communicate and not become feral.

In Los, the glowing ghouls are among the members of the Church of the Lost, a ghoul cult dedicated to protection of the Secret Vault. They are less affected by radiation than their comrades from the Capital Wasteland and New California.

The distinctive luminescence that is the trademark of the glowing one can be best attributed to an unusually high amount of radioactive material that builds up in the bloodstream and muscle tissue of a typical ghoul. Sometimes, upon the transformation into a feral ghoul, the neurological systems of the body cease filtering these particles from the blood and tissue, instead causing them to build a distinctive bio-luminescence that is a characteristic of the glowing ones. In daylight, they simply appear to be incredibly pale feral ghouls, but in darkness they glow with a vivid yellow-green hue, their opaque skeletons clearly visible as in an x-ray. Approaching a deceased glowing one can cause minor exposure to radiation.

A glowing one in the flooded area of the Irradiated metro

Keller Senior, a feral glowing one in the National Guard depot bunker

Tame glowing ones: Meat and Ethyl in The Chop Shop

Glowing ones emitting a radiation wave in the White House

Samuel, an alpha-male glowing one

Stefan, a feral glowing one in the Red Racer factory

Jason Bright, a glowing one that hasn't become feral
在此图库中添加照片

The first mate, a feral glowing one aboard the Yangtze

a glowing one in an abandoned house in Charlestown

A glowing one at Wildwood Cemetery

A glowing one at the Kingsport Lighthouse

A glowing one at the Eagle's Cove Tannery

A dead glowing one in Longneck Lukowski's Cannery

A glowing one in the catacombs of Longneck Lukowski's Cannery

A glowing one on the top floor of the Atlantic Offices

A glowing one in Vault 88's incomplete atrium

Patrick Gibbons, a feral glowing one encountered at the Cranberry Island Bog in Far Harbor

Oswald the Outrageous in Nuka-World 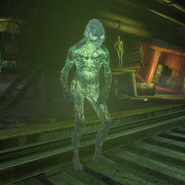 Rod Stoddard a feral glowing one at Hub 360

A higher level version of a glowing one, covered in glowing green blisters of radiation

A higher level version of a glowing one. Its body is bloated and swollen with radioactive material

A mounted glowing one head
在此图库中添加照片

A glowing one at the Garrahan Estate 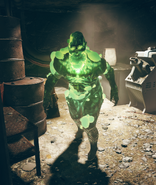