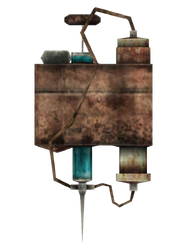 Psycho earns a nickname in All Roads.

“Oh, I was probably tripping hard on Psycho when I sent that.”— Mobius

Psycho is a consumable item in Fallout: New Vegas.

A military-grade psychosis-inducing amphetamine, Psycho is provided in a unique delivery system that mixes strange chemicals of military origin immediately prior to injection.[1][2][3] The drug saw its inception in the laboratories of a research division operating under the authority of General Constantine Chase. It is similar to methamphetamine, but legally distinct from it.[4] It entered combat use during the final stages of the Anchorage Reclamation, to reduce the impact of attrition on U.S. forces deployed to the Alaskan front. Its deployment was authorized by General and his chief medical officer, Dr. Adrienn Adami, despite the clinical trials being incomplete at the time.[5]

Its primary effect is an increase in damage resistance and dampening of higher brain functions, intended to create tough shock troops for human-wave assaults. The caveat is that the dampening effect also makes the soldiers hard to control.[6] Some variants of Psycho, based around similar chemicals, also increase combat performance by speeding up reflexes and bodily functions to allow the soldiers to deal more damage, though said variant precluded the damage resistance boost.[7] Both cause them to be particularly jumpy and aggressive.[8]

Due to the rushed nature of the drug's development and deployment, numerous side effects manifest as a result of Psycho usage. Chief among these is that the stimulant can cause users with weak hearts to suffer a fatal heart attack.[9][10] Long term effects include dementia, psychosis,[5] elevated levels of aggression, and general agitation. It may also cause internal damage.[11] Addiction aggravates the adverse symptoms.[12]

Long term Psycho addiction may progress to the point that standard treatment options available in the wasteland, such as Addictol, are no longer effective in treating the habit.[13]

The player character may consume Psycho or use it as an ingredient in slasher, which increases both damage and damage resistance but has a much shorter duration.

The drug is featured prominently in the deaths of the Singer (poisoned by Swank), Chance (overdose enabled by Benny) and a group of Fiends that burned their victims at the tribal village. Benny says in one line regarding the drug, that the "only thing in that vial is Vegas."