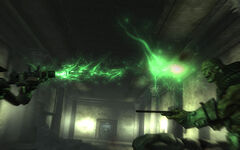 A plasma rifle discharging into a super mutant's face.

The urban plasma rifle is an energy weapon found in Fallout 3.

This plasma rifle is a lightweight urban warfare weapon[1] created by REPCONN Aerospace for the US Army based on engine parts from失败的Z43-521P - “绿豆” 电浆发动机火箭。Like the AER9 laser rifle, it uses a microfusion cell as its power supply. It taps into the cell, essentially a small fusion reactor, to produce a toroid of plasma that is ejected down a superconducting barrel.[2] In contrast to the Winchester P94, it does not have the electromagnetic claws.

The plasma rifle uses microfusion cells, the same type of ammunition used by the laser rifle, and can discharge up to twelve green, self-illuminated plasma bolts before requiring a reload.

The plasma rifle fires projectiles that inflict potentially heavy damage at a fairly quick semi-automatic rate of fire. The plasma bolt moves at sub-sonic speeds, giving enemies the chance to dodge the plasma bolts. Because of this, the plasma rifle is most effective in close to medium range combat, as opposed to the laser rifle, which is better suited to long range. Due to its fast semi-automatic rate of fire, it empties its 12-shot magazine rather quickly, and its reload time is somewhat longer than most other small guns/energy weapons. Maintenance is a combination of perks and drawbacks: Like other energy weapons, it has a high maximum condition compared to small guns, but is expensive and/or difficult to repair. A plasma rifle in poor condition (under 10%) can cost over 1,000 bottle caps to repair, also in normal circumstances the plasma rifle can be hard to come by. The plasma rifle has twice the chance of inflicting a critical hit than most other weapons, and can turn enemies into piles of green goo if the killing blow is a critical hit. Like all energy weapons, the plasma rifle's plasma bolt can ignite gas leaks.

The plasma rifle can fire a total of about 500 shots, the equivalent of 42 reloads, from full condition before breaking.

A plasma rifle critical hit on a raider 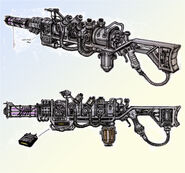