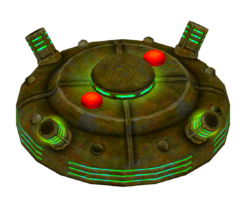 The plasma mine is a weapon in Fallout 3.

For some reason, it has a tendency to fall on its side or upside down, probably due to its design.