Unlike the regular shock baton, this weapon doesn't do shock damage. However, when it scores a critical strike, the target will fall to the ground just like the knockdown effect of the Victory rifle, the scoped Gauss rifle, or the Katana

. Unlike the Paralyzing Palm perk, it doesn't depend on the use of V.A.T.S. for its knockdown effect- instead, it is triggered by every critical strike (though the stun only lasts for two seconds). Since it requires only 15 AP though, it is a good weapon to use with V.A.T.S. Although it has a high base damage it does not do as much overall damage as the shock baton due to the lack of shock damage, but the knockdown effect does give an opportunity to deal a few more blows. 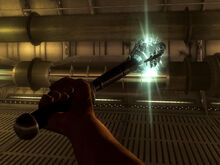 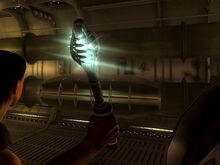