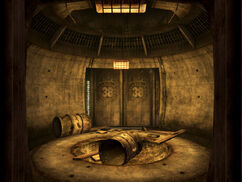 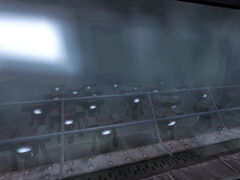 The army of securitrons, waiting to be deployed

“Now take the Platinum Chip, go down to that bunker or whatever it is, and destroy whatever gizmo-happy brahmin shit you find.”— Caesar

The securitron vault is a bunker in the Mojave Wasteland located under the weather monitoring station at The Fort. Caesar's Legion has attempted to open the elevator down to the vault by drilling, prying and blasting, but all attempts have since been unsuccessful.

The Courier can access the securitron vault after acquiring the platinum chip one of three ways, including killing Benny, killing Caesar, or by receiving it from Caesar. The entrance reveals a small vault, bathed in light radiation. Mr. House has access to a terminal in the first room, but no control of the facility's security.

After killing or sneaking by the first protectron, three terminals can be found through the first door. These can be used to deactivate the turrets and protectrons via Average and Hard locks, respectively. The third terminal for the sentry bots is unusable. The next room has two protectrons and two turrets. It consists of a set of generators, and many long, windowed rooms looking out over an army of securitrons. The final room contains an operations console that can read the data on the platinum chip to upgrade all securitrons, and activate the army in the vault.

The securitron vault appears only in Fallout: New Vegas. 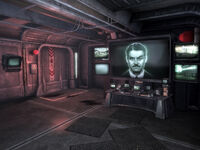 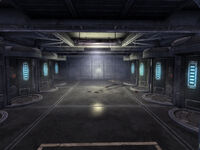 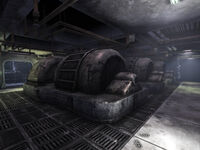