Cyberdogs are cybernetically augmented dogs which incorporate both organic and mechanical parts in their being. The abilities of individual cyberdogs vary from dog to dog, but as a rule, they are all physically superior to their organic counterparts and are far more long lived,[1] with advanced models being intelligent enough for conversation.

Cyberdogs are rare and 创造这种生物极为困难，需要很高的成本，犬的培育和训练也是一件麻烦事。因此只有在战前的美国政府，大山脉以及英克雷有制造此类生物的基地。Big MT even took things one step further and created weapons (like the K9000) which used a dog’s brain as its central processor and could sniff out and lock onto targets.[2]

In addition to military-grade dogs, Big MT also produced lesser variants for the nation's more affluent police departments, allegedly to sniff out communists within society.[3] Denver in particular had a large supply of cyber police dogs, and they still roam the streets.[4] 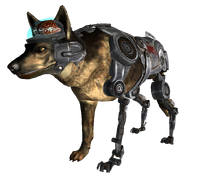 Cyberdogs have the appearance of cybernetic canines (除了兩种以外) 都有黄色的巩膜。(only the "cyberhound Mk III police model" have a normal, white sclera). Cyberdogs of this type are also called "K-9 units." Despite being highly modified with electronic parts, they are not affected by pulse weapons.

Some standard cyberdog models are:

A weapon model (and an outstanding exception to the standard cybernetic canine's appearance) is the K9000 cyberdog gun, created to act as a personal operated, handheld weapon system. Instead of the standard cyberdog units, which are canine in general anatomy, the K9000 cyberdog gun is more akin to a heavy weapon. It is a living dog's brain that has been provided with a machine gun frame utilizing the .357 Magnum ammunition. Its "canine" features include two metallic "ears" mounted on top of the weapon that moves like a real dog's and a sniffer mounted on the jar containing the brain, which allow the gun to sense its surroundings. It can be enhanced with a resla roil increasing its damage by 2 and a mentat chow to increase its rate of fire by 4.

Robodog is a cyberdog, more specifically "Cyber-Hound Mk II personal security model." Dr. Henry brought it from the Enclave Oil Rig and settled down in the NCR.[7][8]

Rex is initially under the ownership of The King and needs a new brain due to neural degeneration. During the Nothin' But a Hound Dog quest, he can be turned into a companion and optionally cured of his condition.

The military cyberdog has a sonic bark used as a weapon, and has a chance to knock down the player character with its melee attack. They also appear to have the ability to self heal/repair themselves.

A slightly weaker variety of the military cyberdog. They can be distinguished from military cyberdogs by their unique black and white paint, as well as the red and blue reflective patches on their backs.

A specialized cyberdog in that all of the original canine biological parts have been discarded, except for the brain, which is now housed in the body of a heavy weapon style firearm. It fires .357 Magnum ammunition. "Canine" features include two metallic "ears" mounted on top of the weapon that move like a real dog's and a sniffer mounted on the jar, allowing the gun to sense its surroundings and causing it to growl when pointed at an enemy, even when the enemy is out of the vicinity of the weapon. It can be enhanced with a resla roil increasing its damage by 2 and a mentat chow to increase its rate of fire by 4. 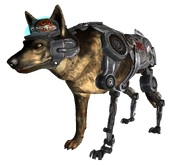 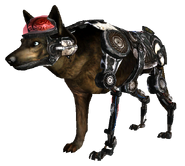 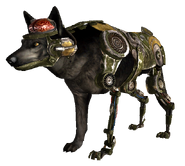 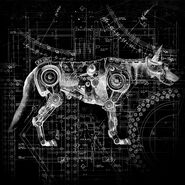 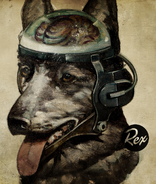 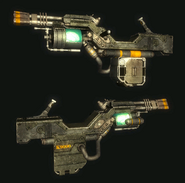