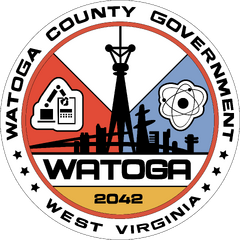 Watoga is a town in the Cranberry Bog region of Appalachia in 2102, best recognized by its monorail system and its distinctive tower.

Watoga was founded by Watoga, Inc. on February 4, 2042, built in the place of the cleared Watoga State Park forest.[1] Financed by Atomic Mining Services, the Watoga project aimed to create a "city of the future" and was designed to be fully automated. Civil services and municipal management were handled by a variety of carefully programmed RobCo Industries and General Atomics International robot models, operating the city cleanly and efficiently.[2][3][4]

The only human element in governance was the mayor, chosen by the city's systems for a term of random duration. The system was intended to ensure that the mayor won't be hounded by special interests or bribes from corrupt enterprises. The Watoga Constitution also granted the mayor's executive orders to be the force of law, with the single exception that no such law could directly counteract that authority.[1]

As the randomly-selected mayors likely wouldn't have the governmental experience, the Watoga Municipal Center office was outfitted with the Mayoral Artificial Intelligence Assistant, or MAIA, an artificial intelligence intended to provide the mayor with the necessary expertise to help make executive decisions. Mayors in the office could tell MAIA their desires to draft the appropriate legislation or, if confused about a possible course of action, be provided with informative answers from her knowledge database of decades worth of curated news articles, court opinions, and legislature.[1]

Despite the founding company's intentions, the system of governance proved to be fundamentally flawed in practice. Mayors often had no regard for the public interest, instead abusing their position for personal gains, such as the banning of rock and roll music.[5]

Watoga greatly suffered from elitism, with steep property prices excluding all but the richest Appalachians from purchasing real estate within the city. The elites had a vested interest in their city, voting against any measures that would endanger their status, including limiting emergency fire services to only the city's major districts[6] and declining additional bus services so that the lowered cost wouldn't bring the "wrong kinds of people" to the city.[7]

After Watoga's completion, the need for human workers dwindled, causing nearby towns to become abandoned and forfeit.[8][9] When applying for Watoga citizenship, residents in the surrounding area were routinely rejected by RobCo's management, including full-time employees at the company.[10] The dissatisfaction and rejection caused Scott Turner, a RobCo developer, to form the Free Watoga People's Party and sabotage the city.

On October 22, 2077, Turner launched Operation Free Watoga, breaching Watoga's emergency service protocols and causing the city's robots to malfunction.[11] To prevent others from fixing the machines, Turner broke the transmission sequencer and corrupted the software on update terminals throughout the RobCo Research Center, leaving the terminal in his office the only machine capable of creating updates. To restrict access, Turner locked the terminal and prevented any badge other than his own from accessing the office.[12] While Turner had only planned to evacuate Watoga to make elites beg for permission to live in the city again, Watoga's emergency services massacred the citizens as they tried to evacuate.[13][14] Any residents who weren't evacuated from the city perished.[15]

As a precaution in the event of her death, the mayor, Barbara Elizabeth, issued an executive order to instate anyone who entered her Watoga Municipal Center office as the new mayor for the day. Once evacuations were complete, Elizabeth had planned to negotiate a truce with the unknown saboteur, but succumbed to fatal injuries before she could do so.[13] Watoga's robotic emergency services continued to remain hostile after the Great War, deterring survivors from taking refuge in the automated city's supply-rich environment.[16]

Various vertibird wreckages and skeletons are found scattered across the city after the Great War. Some are left from military attempts to retake the city while others are from the Brotherhood of Steel's attempts to salvage technology and supplies from the city.[17] Following the failure of Operation Touchdown and fall of Fort Defiance, the scorchbeasts local to the Cranberry Bog have nested within the city itself, as seen by the earthen mounds found atop many of Watoga's buildings.

Watoga is a fairly large settlement area with tall buildings, including the Atomic Mining Services corporate headquarters in the center. Some enemies that inhabit Watoga are protectron Watoga government workers, Mr. Handies, assaultrons, eyebots and the Scorched. To pacify the robots, players need to complete the side quest, Mayor for a Day which is started on the top floor of the Watoga Municipal Center.

Watoga appears only in Fallout 76. 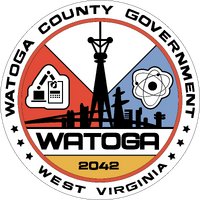 Watoga and station seen from the south