The Mariposa super mutants or West Coast super mutants are a variety of super mutants common on the West Coast and the Midwest that originated from the Mariposa Military Base in California. While some of them can be rather stupid, in general they are more intelligent and civilized than their distant Vault 87 cousins.

Super mutants were first created on the West Coast by Richard Grey, who led the expedition to Mariposa in 2102. When the expedition was attacked by robots, he was dipped in a FEV vat, but managed to crawl out. FEV was initially meant to be injected into humans, but Grey soon found out that direct physical contact worked as well. He began to mutate in horrible ways, turning into a blob of flesh-like material. He developed psychic powers, which were enhanced by consuming living minds to expand his own brainpower. Slowly, as wanderers made it into the base themselves, he started doing his own experiments with FEV. Grey — who now called himself "the Master" — lamented the needless destruction of the Great War. In his warped state, he decided that he would have to force humanity to evolve. If everyone could be as perfect as his super mutants, there would be no more conflict. Those who could not evolve would die. Around 2155, the Master began seeking out uncontaminated humans with which to create mutants and build his super mutant army.

However, creating super mutants was a very hit or miss process. The great majority of super mutants produced by the Master and later his Lieutenant in Mariposa's Vats were big, dumb brutes. Physically, they were vastly superior to humans, but they had the intelligence of children. What exactly causes some mutants to be brilliant and others to be stupid is unknown. The Master was certain it was related to radiation damage: humans who hadn't been exposed to too much radiation yielded smarter mutants (see his personal diary for his thoughts on this). His Lieutenant, however, had a different theory. When the bombs hit the research facility and turned it into the Glow, they cracked open a few tanks filled with FEV. The bombs' radiation then mutated this FEV into an airborne strain. But this new airborne FEV didn't have any real mutagenic effects on people. All it did was inoculate human subjects against the real FEV, acting as a sort of vaccine. The ideal dipping subject was someone who hadn't been exposed to the airborne FEV. Both of these conditions—no radiation exposure and no mutant FEV inoculation—were present in one population: Vault dwellers. Each Vault contained around 1,000 viable subjects to be dipped and turned into super mutants. Which factor exactly determines what you'll get from a dipping—radiation or inoculation—is still uncertain, though as a rule of thumb, the cleaner the subject, the better.

Fall of the Master

In 2162, a person known as the Vault Dweller destroyed the mutant army by causing an explosion in the FEV vats at Mariposa, which collapsed the entire base, after which he proceeded to The Cathedral and killed the Master. Without the leadership of their creator and his lieutenant, the mutants divided into at least three factions. First of them, led by Gammorin, decided to leave California and find a place for themselves somewhere in the East. The second, under the leadership of Attis, wanted to continue the Master's work, rebuild the army, and dominate the Core Region once again.

The third remains in the Core Region. Some of these super mutants, however, especially those who retained more of their intelligence than their less pure brethren, wanted to make peace with humans, put old differences aside and work together to rebuild the world after the War. In 2185, super mutant Marcus and Brotherhood of Steel Paladin Jacob crossed paths in the desert and punched and shot at each other for a few days. Eventually, they gave up (laughing), unable to get an advantage over the other. The two started traveling together, arguing over Master and BOS doctrine. Eventually the two, along with the trail of ghouls, humans, and super mutants, founded the community of Broken Hills. Some super mutants also settled in other more tolerant human communities, like the New California Republic. A conversation with an non-player character in Fallout 2 also indicates that some super mutants and members of the Children of the Cathedral traveled North. However, many of the super mutants remain hostile to humans, and traveled the wastelands in small groups with floaters and centaurs, like during the Master's reign. These were known as the remnants of the mutant army. Conversations in Fallout 2 indicate that some of the super mutants have started going senile and seem to be suffering other effects from old age.

Some time after their departure, the faction led East by Gammorin was pursued by Brotherhood of Steel airships. While most of them ended up in the vicinity of Chicago, far from Gammorin's forces, one of the zeppelins crashed north of the mutant encampment. The leader, Paladin Latham, challenged Gammorin to a single unarmed combat and, to the surprise of everyone, killed the mighty mutant. As he defeated the previous chieftain, the super mutants expected him to become the new leader of their army. Latham suffered a head injury during the combat, and throughout the years, he grew more and more insane, even though he managed to organize the mutant forces into an army nearly as powerful as they had been during the Master's reign. This reshaped army was since led by him, his right hand Toccamatta and minor commanders.

When Latham's forces encountered Calculator's robots from Vault 0, he swore an oath to destroy the cybernetic menace. By that time, he assumed the name "Gammorin", after the mutant chief he had killed. Gammorin's mutant scientist ran extensive research in order to find a cure to super mutant sterility. However, his laboratory in Jefferson was taken by a splinter faction of the Brotherhood of Steel from the Chicago area, who believed it to be a weapons manufacturing plant. Eventually, Latham/Gammorin and his forces were defeated by the Brotherhood. After the defeat, many mutants were, however, allowed to join this Brotherhood to fight against the robots. The Brotherhood tried to continue the work on the cure to super mutant sterility, but they were unsuccessful.

A smaller sub-section of the mutant army did remain together in the Core Region, under the command of a visionary lieutenant named Attis. Highly intelligent and vindictive towards the Brotherhood of Steel, Attis took his group into hiding, searching for clues regarding the history of the FEV virus. Some time after 2208, learning about a secret Vault-Tec installation in Texas with new and possibly improved versions of the FEV virus, Attis led his group to the area where the rumors started, the ruined city of Los. His ultimate goal was the continuation of The Master's plan - to rebuild the mutant vats and eventually transform the entire human race into mutants. His forces were eventually defeated by the Brotherhood of Steel, who were hunting for them.

In 2236, the Enclave discovered the remnants of the Mariposa Base. Soon, assault squads combed the desert for slaves they could use to mine the military base and get to the vats. One of the squads included soldier Frank Horrigan. Enclave construction crews, as well as human and super mutant slaves began excavations. In September they uncovered FEV, and mutations began to occur in the human workers. Frank Horrigan comes into contact with the virus and is sent to the Enclave labs for study. He later becomes the Enclave's finest tool of warfare: a unique, deadly super mutant extremely loyal to the president.

In 2237, having obtained the FEV data, the Enclave abandoned the site after more mutations occurred, causing 2nd Generation super mutants to arise - the Enclave left a single squad behind to wipe out the super mutants, but the mutants, using armaments they have cached in the base during excavation, reduced the squad to ashes after suffering heavy casualties. The remaining 1st and 2nd Generation super mutant slaves were sealed inside the base by Enclave sappers, who collapsed the entrance to the base. The mutants formed a new community under the leadership of Melchior, whose magician talents had allowed them to hide the weapons. 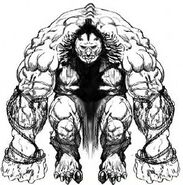 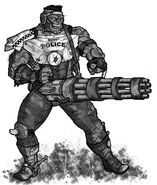 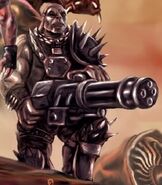 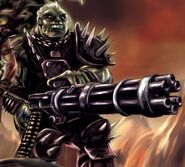 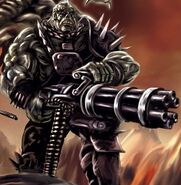 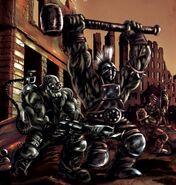 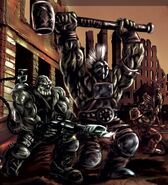