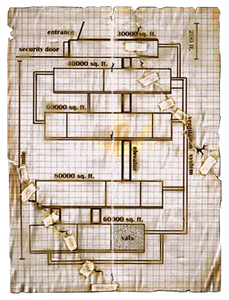 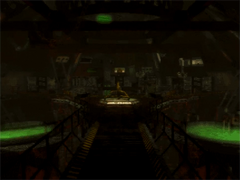 The Mariposa Military Base was a top secret United States military facility built to house Forced Evolutionary Virus research previously conducted at West Tek, located somewhere in the area of the Mariposa unincorporated community in California.

In 2076, the NBC division of West-Tek achieved breakthrough results in the Pan-Immunity Virion Project. The United States Defense Department, in fear of international espionage, moved a military team under the command of Colonel Robert Spindel and Captain Roger Maxson onto the site to secure and oversee the project, now dubbed the FEV (Forced Evolutionary Virus) project.[1] On January 7, 2077, all Californian FEV research was moved to the newly constructed Mariposa Military Base from the West Tek facility to commence testing of the virus on human subjects.[2][3] The security team was transferred to the newly constructed base as well, to provide protection for the research going on within the facility. They were not informed of the nature of the research.[4]

This secrecy backfired shortly before October 10, 2077, when soldiers stationed at the base discovered the human testing that was going on at the base, made worse by the fact that the scientists were using military prisoners as test subjects. Colonel Spindel suffered a nervous breakdown, locking himself in his office, leaving Captain Maxson to handle the deteriorating situation at the base. The soldiers were screaming for blood and became increasingly aggressive.[4] When two days later, on October 12, the captain stopped a soldier from murdering a scientist, he ordered the scientists to be interrogated.[5]

The first scientist to be interrogated by Captain Maxson was Robert Anderson, chief researcher of the research team at Mariposa. Anderson explained that the testing at the facility was sanctioned and, in fact, ordered by the government, as he outlined the experiments to the captain. When Maxson refused to believe him, the scientist lost his nerve and started screaming how he was just following orders and that he was also a military man. In response, Captain Maxson killed him.[6]

This established Maxson as the leader of the rebellion. His position was further reinforced on October 15, when Colonel Spindel committed suicide as his men broke into his office.[7] Subsequent scientist interrogations invariably ended in executions. Erin Shellman held out the longest, almost convincing the captain that the experiments were really ordered by the government.[8] On October 20, 2077, Captain Maxson declared his unit in full secession from the United States, attempting to force the government to respond to the situation at Mariposa. No response came. Two days later, he ordered the families of soldiers under his command to take shelter within the facility.[9]

On October 23, 2077, the Great War struck. As Maxson was halfway through prying the story from Head Researcher Leon von Felden, the facility lost contact with the outside world as nuclear weapons started to drop. Spared the nuclear devastation, Mariposa protected the inhabitants from nuclear fallout flooding the wasteland. Fearing that China would soon make up for the oversight, on October 24, Maxson ordered his soldiers and their families to prepare to vacate the base the next day.[10]

On October 25, Sergeant Platner volunteered to take atmospheric readings outside the base. Reporting no significant amounts of radiation in the atmosphere, final preparations for the exodus were undertaken. On October 26, Maxson ordered the remains of the scientists to be buried in the wastes outside the base. A day later, on October 27, former US servicemen and their families left the base under the leadership of Captain Roger Maxson, heading for the Lost Hills government bunker in the south.[11][12]

The Rise of the Master编辑

在被FEV病毒侵蚀的痛苦之下，格雷勉强爬进了马里波萨基地的主控室，但却已然近乎不成人形，他通过某种方式将自己的神经系统和基地的电脑连接到了一起,drawing upon its sizable data banks.[15] As he created the idea of the Unity,主教”非常小心地诱捕不甚或是不幸进入基地的废土游民并将他们浸泡到盛满了FEV溶液的贮藏罐中。When the first true super mutants were created, he set out to create a true mutant army, at the same time deciding to look for a permanent base of operations. 在2155年, one of his patrols located a group of vault dwellers from the Los Angeles Vault, 主教”决定转移自己居所, occupying the vault.[16]

The base was entrusted to the Lieutenant, one of the greatest super mutant minds to exist. 马里波萨军事基地was rebuilt and cleaned up，已然重新成为了一座防卫森严的要塞。Super mutants roamed the halls, restocking the armories and medical bays and soon it became the staging area for their assault on humanity, as well as the only super mutant production center.[17]

另見： Mariposa Military Base excavation
2236年7月20日，在战前资料的指引下，[18]英克雷军来到了马里波萨基地。[19] The Chemical Corps and other scientists began to scour the base, while assault squads began征召了奴工对此地展开挖掘工作.[20] In the process, they capture Melchior from the town of Redding.[21] Excavations began in September. The slaves and construction crews dug into the collapsed base, removing tons of rock. Unprotected wastelanders were exposed to low levels of FEV in the ruins, released after the base self destructed and mutations began to occur. At the same time, Frank Horrigan is exposed to the virus and sent to Control station Enclave for study.[22] 梅尔基奥尔(now mutating)意识到一旦他们在这里的工作完成就会立刻遭受被英克雷杀人灭口。他以学会的魔术把戏偷偷藏起武器，一场大规模的起义就已在酝酿当中。[23] The excavations are complete in January 2237. Shortly after Enclave scientists manage to obtain a pure sample of FEV and leave the base, the mutants rose up against their Enclave overseers. 英克雷在留下满地尸体之后匆匆撤离了此地，堵死了基地的入口。[24] The remaining first and second generation super mutant slaves remained in the base, and the group formed a new community under the leadership of Melchior.

Mariposa was a reinforced military base, constructed in the middle of nowhere, in the side of a mountain. The exterior had a characteristic white lining and a massive air conditioning vent, which provided fresh air for the complex. Inside, it consisted of four levels, stretching across a mile of depth.

基地的二层是宿舍、医疗区和武器库的所在地，The quarters were spacious, although spartan in design,储存着大量的武器补给just around the corner and a well equipped sickbay, stocked chock full of medical chems, surgical equipment and medical beds with integrated life support systems.

基地的第三层可以大致分为两个部分：one was the general access area, where the assembly room and elevator to指挥官的办公区，the second a监狱区和一个宽敞的大厅，从这一层再往下，就会到FEV病毒的储存和实验区。早在战前这里就始终执行着严格的通行禁令，除去科研人员之外的其它人一概不得入内。

Colonel Spindel and 罗杰·马克森和他麾下的士兵 were barred from entry.

Divided in two as well, 最底层储存着大量FEV病毒的溶液，也安置着可以控制整个基地的电脑主机。scientist living quarters as well as the base commander's office. As with the third level, access to the FEV research area was 执行通行禁令，只有科研人员可以入内。A special containment squad, the super mutant Vat Team 9, 把守着通往FEV储存区的走廊，随时准备着消灭任何有异动的目标 It was composed of three soldiers.

The vats control room was where the base's mainframe was also located, holding personnel logs (Boyarsky, Roger Maxson, Richard Grey etc.) as well as the self-destruction initiation subsystem. Encrypted behind a firewall, these were nonetheless accessible for a skilled hacker. Alternatively, just blowing the console up would trigger the self-destruct sequence, but the base would be set to alert status, powering up the force fields.

The layout of the base is pretty much similar to that in Fallout, although there are some tents (in one of them is the Military base holodisk 5) outside the base, wolf packs and the entrance to the base is blocked by rubble. To get in the base the player character will need to find the metal pole and put it on the rail cart ("Use on"). Next, they need to put some dynamite (can be found in the little shack right from the entrance to the base) on the rail cart (one need to right click and hold on the cart, and then choose the "bag" option; after that, simply click on the dynamite from the menu) and push it down. Doing this will net the player character 5,000 XP.

In the southwest corner (in the hall leading to the elevator), there is a broken power generator, which can be repaired for 1,500 XP (this can be easily done if one has Vic in your party). Doing this will also turn on the lights in the base.

The second level of the base is filled with super mutants, about 15 of them, but for an experienced player character, they shouldn't pose a large threat. Mutants are usually wielding power fists and flamers, although few of them use laser rifles and plasma rifles. In most of the lockers, the player character can find money, stimpaks, some ammunition and in the east corner of the map, a suit of T-51b power armor.

The deepest level of the base houses one of the tougher enemies in Fallout 2, Melchior. He is standing in the northwestern corner of the map, surrounded by goo which has remained there since the Vault Dweller destroyed the FEV vats.

Melchior himself is not that tough, but his abilities are unique. From the vats (or more precisely, the goo), he can and will summon deathclaws, fire geckos, floaters and mutated mole rats. They are summoned in that descending order, and if the player character is strong enough to survive several waves of them, they are rewarded with some funny lines. He can have 4 summoned allies at a time, which can be bothersome, so it is best to dispatch him first, and then his "pets." This is quite challenging, even for experienced player character's with a good party, so they should be very cautious, and prepared to leave the scene of battle with 1-2 less companions. Melchior also guards a locker containing a PPK12 Gauss pistol.