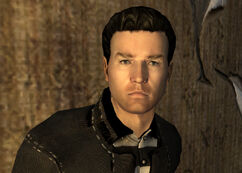 “We've had reports of violence against NCR citizens in a neighborhood just to the northeast called Freeside. Ever been there?”— Dennis Crocker

Kings' Gambit is a main quest in Fallout: New Vegas.

Ambassador Crocker is concerned that the New California Republic is merely tolerated in New Vegas; there have been issues between NCR citizens and Freeside locals, and the ambassador seeks an end to it.

Once you have completed the quest Things That Go Boom, speak to Ambassador Crocker, who will assign Kings' Gambit. Crocker tells you about all the violence in Freeside being caused by the Kings. He gives the Courier two options: solve the problem diplomatically, or kill Pacer, the main person responsible for the violence.

If the player character has already talked to the ghoul Rotface, he may have given them tips, two of which include the fact that Pacer has a heart problem and too many drugs will kill him. Another tip states that he has a feud with the Van Graff family. If the Courier has not talked to Rotface, this option can also be opened by stealing Pacer's treatment records from Julie Farkas' filing cabinet in the Old Mormon Fort. This will add two optional objectives to the quest, one to kill Pacer by adding Psycho to his jet (requires 60 Medicine) and the other is to kill Pacer in a way that implicates the Van Graff family. One must to do this before his stash appears.

This method works even if the player character killed everyone in the Silver Rush building earlier. Just follow Pacer there after planting the note in his room and kill him with a plasma or laser weapon to frame Van Graffs.

It is important to talk to The King before returning to Ambassador Crocker.

If the Courier does not see any progress on this quest after leaving the note, head to Silver Rush and watch Pacer get killed.

Method: Frame the Van Graff family (working as a guard)

However, killing Pacer will break the quest line G.I. Blues, therefore it is recommended finishing that quest first.

Doing this will off Pacer in a way to frame the Van Graffs, so the player character will still get the rewards from the Ambassador, and the Kings will not suspect them.

Note: The player character must first go back and talk to the ambassador (after they speak with Rotface) first before planting the plasma grenade/mine. Otherwise, Pacer will never go to sleep in his room.

Method: Spike the jet with Psycho

To complete this method, either speak to Rotface and give him caps until he tells the Courier about Pacer's addiction or check the filing cabinet in Julie Farkas' wing of the Old Mormon Fort. One must also first speak with Ambassador Crocker and tell him their plan, which requires a [60] Medicine check. It will then add an optional quest to kill Pacer using his jet. Follow these steps:

Note: killing Pacer in any way will immediately fail the quest G.I. Blues, so if One wants a favor from The King, they need to finish G.I. Blues before killing him.

Using an energy weapon to kill Pacer will allow one to accomplish this quest, however using any conventional weapons will result in failing the quest. If the latter is the case, the player character will still get a reward (if they apologize) and are still allowed to move onto the next quest. If the player character wishes to easily regain fame with Freeside, go to the Atomic Wrangler and talk to James Garret regarding spreading positive rumors about the Courier in Freeside. One will have to pay more caps depending on how infamous they are.

If the favor from G.I. Blues has not yet been used, the Courier can ask The King to stop the violence and turn the quest in. However, if it has already been used, the King will say no and one must return to Ambassador Crocker to tell him that the King will not stop the violence. Crocker will then propose two options (on top of the option to kill Pacer): Talk to Colonel Moore at the Hoover Dam or talk to Colonel Hsu at Camp McCarran.

After this, return to Crocker.

Note: If one attacks Pacer or any other Kings, even after they turn hostile and open fire, it may result in a gain of infamy with Freeside and both groups of Kings as well as the King himself turning hostile. The best way to avoid this is to let the NCR troopers and any companions do the shooting, which results in no infamy gained for the player. Pacer and his men are heavily outnumbered by the NCR troopers alone, meaning there is little chance the King will die in the gunfight. Additionally, there was originally going to be an opportunity to pass a Speech check of 75 and talk Pacer down from staging the coup. This was cut from the game and can only be restored through the use of mods on the PC version of the game.

The player character will get neither of these if Pacer is merely murdered.