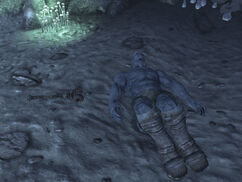 “I'm currently investigating the local Nightstalker population since they seem to have developed a natural stealth field.”— Doctor Henry

Guess Who I Saw Today is a side quest in Fallout: New Vegas.

To begin the quest, the Courier must go to the Jacobstown lodge and talk to Doctor Henry and tell him they will help him research why the local night stalkers have begun turning invisible.

Meet with Lily Bowen, a nightkin standing by the pen outside the front of the lodge, after accepting the quest. One can invite her to come along, but it's not required (this will only work if the player does not have a fellow humanoid companion already).

Exit Jacobstown and circle around to the northwest to locate Charleston Cave, and enter. Continue through the cave. Eventually, one will come across a couple of bighorner bodies and a nightkin body, with Oh, Baby! next to it. Examine the nightkin and take his chewed Stealth Boy, the player will then be prompted to return to Doctor Henry back in the Jacobstown lodge. The night stalkers will not attack if the player has the Animal Friend perk.

Talk to the doctor back at Jacobstown. He'll inform the Courier that since the chewed Stealth Boy was a dead-end, using the Mark II Stealth Boy is the only remaining line of research available to him, and Lily is his best experimental subject. Talk to both the doctor and Lily; they both will agree to the experiment. It's a success, but as soon as the doctor is finished, Keene enters the room and demands the Stealth Boy Mk. II specs.

Note: If one talks to Lily while they are away from Jacobstown, she will run back to Jacobstown. If one needs her, they should be mindful of where this conversation takes place.

Make sure Doctor Henry actually does the experiment; it should not take more than 30 seconds for him to start.

Whichever decision is chosen, it will end the quest. Passing the Science check gives 590 XP, 90 more experience than the other two options do.

"Guess Who I Saw Today" was a soft jazz song written by Murray Grand and performed by Elisse Boyd.