The sniper rifle is a weapon in Fallout 3.

這把半自動武器配備了瞄準鏡，是一把絕佳的遠距離武器，威力和射程都大大超過了普通的狩獵步槍，不過has a very rare ammunition type and is a very fragile gun.

The sniper rifle can fire a total of about 83 rounds, the equivalent of 17 reloads, from full condition before breaking. Heavy use of this weapon will require merchant repairs due to the relative scarcity of spares. 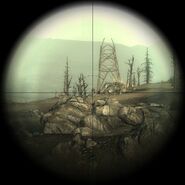 The first two images above, taken from the southwest guard platform at Fort Bannister, will be a 1-shot kill. The color of the first shot has been inverted to improve clarity. The third picture shows how much aim compensation is needed for a head shot at very long ranges. It can be noted that the point of impact is always at the same length up along the vertical crosshair line above the center of the scope and slightly to the right.