“I'll cover you from the ridge. Just make it quick. These boys should be put out of their misery, not plinked to death with some old varmint rifle.”— Ranger Milo

The varmint rifle is a weapon in Fallout: New Vegas.

Although its damage and damage-per-second (DPS) are low, it can be very accurate at long ranges if you manually target outside of V.A.T.S. With good Guns and Sneak skills, one-shot kills with Sneak Attack Critical head shots are possible against low level non-player characters. 在配用消声器和夜视瞄准镜的时候它会成为一把很不错的暗杀武器。

The varmint rifle has one of the best scope modifications for low light vision. Though it doesn't always make the opponent light up, it does let the player make out their details.

The varmint rifle can fire a total of about 595 standard rounds, the equivalent of 119 reloads, or 75 reloads when modified with extended magazines, from full condition before breaking. Template:Durability table

The varmint rifle was intended to be chambered for .22LR rounds at some point during development. Among the indicators is the "Reduced Limb Damage" effect previously shown in the Pip-Boy for both the silenced .22 pistol and the silenced .22 SMG (prior to patch 1.3.0) being named "DummyNVVarmintRifle", as well as Dixon carrying a varmint rifle in his inventory along with 16 .22LR rounds, rather than 5.56mm rounds. However the .22LR variant was so unpopular due to the low damage that its ammunition was changed to 5.56mm.[1]

Varmint rifle with the scope modification

Varmint rifle with the silencer modification

Varmint rifle with all modifications 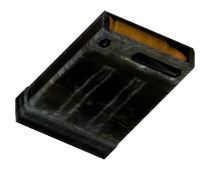