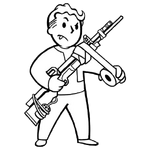 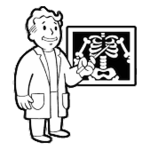 The most common character conditions found in Fallout 3, Fallout: New Vegas, and Fallout 4 are poisons from chems or from the environment, and damage from combat. Fallout 4 is currently the only installment to include illnesses.

In Fallout 4, the Sole Survivor can become ill in Survival mode.

All illness can be cured with antibiotics, resting for several days, or by paying for the Cure Health service from any doctor. The risk of contracting specific illnesses can be reduced by taking the appropriate herbal remedy prior to the disease check.

Illness chance, in general, is increased by all forms of Fatigue but does not directly impact Action Points. Regardless of risk exposures, the bed slept in and the duration of sleep, there is always a slight chance of contracting illness when going to sleep (but announced upon waking); sleeping for short periods of time (to save the game, for example) may increase this chance overall, due to an increased number of (shorter) sleep sessions, although all sleep sessions after the first will be at the minimum probability, assuming no further risk disease exposures between sleep.

An immediate check for contracting a disease is made 30 real-time seconds after high-risk exposure. A check is also made when going to sleep. Apart from these two situations, risk exposure simply increases the probability (disease risk pool) of getting a disease at the next check. Checks are not "rolled for" unless the chance is 25%+.

In addition to poor sleep quality, causes of disease risk include: using chems, eating anything (but especially bad or uncooked meat), cannibalism, drinking or swimming in irradiated water, being in rain, drinking Nuka-Cola, and taking damage from feral ghouls, bugs or other infected creatures. Each event puts the player character at an increased risk of contracting an illness. High-risk events trigger a near-immediate disease check. Even if a single event doesn't trigger illness to start, each event will increase the probability of contracting an illness with each event, up until the character sleeps (when the final check is made and the disease risk pool is cleared) or gets a new disease (which also clears down the risk pool).

Various herbal remedies become available for crafting, purchase and as a loot in Survival mode:

Each type of remedy will act (one time only per dose) to reduce the risks of any of the two specific diseases that it resists against, but only if the herbal remedy is taken before the disease check. This means taking the herbal remedy prior to sleeping, or within 30 seconds (real-time) of a high-risk event.