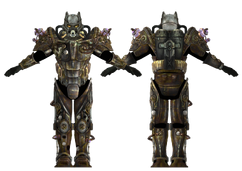 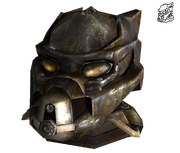 The Tesla armor is a type of power armor deployed by the Enclave in the Capital Wasteland in 2277.[1]

A heavily modified suit of standard Mark II armor, with the primary difference being the Tesla device rigged to the suit, with five attraction coils mounted on rounded shoulders. While it retains the original's segmented armor coverage, the Tesla device aids with the operation of energy weapons and protects against laser and plasma weapons.[2]

This armor has a more dilapidated appearance compared to the standard Mk II armor. This armor is familiar to some Brotherhood soldiers, showing that it has been in use for some time.[3]

The armor makes the operation of energy weapons by the wearer easier, boosting the Energy Weapons skill of the operator. Tesla armor has Tesla coils on the shoulder pads and some lights running down the legs. It looks a bit bulkier than other power armors. If viewed closely, it appears to have remnants of yellow paint on some areas.

Although this is powerful armor, the only way to get it (and spare suits for repairs) is by fighting Enclave soldiers or finding at least one in the Mothership Zeta add-on. The Enclave soldiers' armor is usually acquired in a rather poor condition. Despite this drawback, the armor is still one of the best to be found by the end of the game,

Tesla armor can be given to Protector Casdin at Fort Independence for 5.56mm rounds, frag grenades, RadAway or stimpaks as part of the unmarked quest The Outcast Collection Agent.

If a fully repaired suit of Tesla armor is equipped and another suit (not necessarily at 100% condition) is in the player's inventory, the equipped suit will not degrade no matter how many times the player is hit. The unequipped armor will take the damage instead.[已验证]