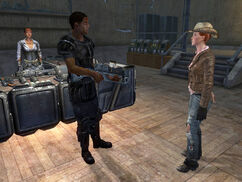 “Hi, I'm Jean-Baptiste, and you're about to stop being a pain in my ass.”— Jean-Baptiste to Rose of Sharon Cassidy

Birds of a Feather is a side quest in Fallout: New Vegas.

Upon asking Gloria Van Graff for work, she will offer the Courier a position as an entrance guard. If accepted, she will tell them to meet Simon outside so he can show them the ropes. When confirming to him that they are the new guard, he will give the Courier Van Graff combat armor and their choice of a laser or plasma rifle and instruct the Courier to keep out undesirables, search potential customers as well as not start any fights or abandon their post. Afterwards, a series of four or five people will come up to the player character. The first person is a drunk, the second is a normal gambler, the third has a problem with being searched and will require a 65 Speech check to be able to be searched, otherwise one will either have to let him in or be rude and deny him entrance. The fourth is a man claiming to look for something to replace his revolver, in reality however, he is looking to kill the Van Graffs as revenge for an unspecified action against his family. He is carrying a bomb, and if one chooses to let him in, he will blow up the entire store, killing everyone inside and destroying most of the items displayed, failing the quest. If one chooses to search him or asks if he has been drinking, he will attack them, forcing the player character to kill him. The last person to appear is Pacer (unless he was killed during G.I. Blues or Kings' Gambit), wishing to talk to Gloria, but not doing so and asking the player character to deliver his message. The Courier can say they will do as he asks, in which case he will mock them as a "good dog." He can also be told to tell Gloria herself, with Simon complimenting the Courier for keeping a cool head. If one tells him to leave and then taunts him after he threatens the player character, he will attack them. Once he is dead, Simon will remark that Gloria will be furious over the matter and G.I. Blues will fail if not already completed. Report to Gloria, and depending on the Courier's actions, she will pay 100-300 caps.

Gloria will then inform the player character that they have found someone else for the guard position but she will offer them a new job to deliver the Van Graff package to a man who can be found east of Durable Dunn's sacked caravan. With a Speech check of 75, one can get 200 caps from the man. Killing the man after the exchange will gain infamy with Caesar's Legion and fail the quest. If any enemies are nearby when they come upon the man he will flee the area and the quest will fail.

Once the package is delivered. Gloria will inform them that Jean-Baptiste Cutting needs help with a matter and that she volunteered the Courier to assist him. Jean-Baptiste will tell them to bring Rose of Sharon Cassidy to him so that he can have a talk with her. If he is asked where she is, he will suggest talking to Alice McLafferty at the Crimson Caravan Company. Alice tells the player character to check the Mojave Outpost, which is west of Nipton. Upon asking Cass if she will follow the player character to Freeside, she will say that she is waiting for her papers to clear. One must first ask her if there is any work available, which will start the side quest You Can Depend on Me. The objective relating to Cassidy Caravans must be completed before Cass will follow the player character. If one has a human companion with them when attempting to recruit Cass, one will need to send them away to allow Cass to follow the player character. One can also avoid this altogether if she is already available as a companion or by killing her at the Outpost, though killing her in open sight will incur NCR infamy and turn the troops there hostile. If she is brought to Jean-Baptiste and he is talked to, he will mention that he is responsible for the massacre of her caravan and that the Crimson Caravan Company and Van Graffs are shutting her down. The Courier can either let him kill her or threaten him not to, in which case the Van Graffs will turn hostile and the quest will fail. If Cass is killed, one will permanently lose her as a companion and fail her companion quest Heartache by the Number. The player character will successfully finish this part of the quest and receive 350 caps as a reward. Jean-Baptiste will tell them to talk to Gloria, who will initiate the final portion of this quest.

Gloria will ask the player character to help her with one more job. A deal with the Legion is going down in the abandoned warehouse, and things might get rough. During the deal, NCR troopers storm in, and together with the Van Graffs, they take out the Legion. The Courier is actually not required to kill any Legionaries, as the NCR and the Van Graffs will easily take care of them. The reward for "helping" Gloria is 1000 caps, Freeside and NCR fame, and the Van Graff combat armor.

“To whom it may concern, if you're reading this, then I am likely dead. I can only hope that I have managed to take out some of those thrice-damned Van Graffs with me. My family deserves that much at least.”