Jamaica Plain is a location and settlement in the Commonwealth in 2287.

Jamaica Plain is located directly southwest of University Point and northwest of Quincy, mostly surrounded by walls with a variety of partially intact buildings within. The town has a contingent of feral ghouls within the boundaries. Once the main story has been completed the Children of Atom carrying gamma guns can be found here, that wander around hunting said ghouls.

One of the more notable buildings, an old church, is found in the southern center portion of the plain which has its doors chained. One can access it by entering the house next to it and climbing on the roof, where there is a platform which leads straight to the hole in the church's roof, or by going through the windows of the church, which are large enough to jump through without difficulty.

The most sought after place in Jamaica Plain is its town hall, found across from the church, the basement the home of the Jamaica Plain treasures exhibit, which has lured treasure hunters in hopes of finding what lies within. Of these treasure hunters, one group in particular can be found dead and scattered throughout the town, including:

The basement used to be a janitor's area but it was changed into a pre-War cache, two months before the Great War. The exhibit itself features many unique pre-War items deemed as treasures by its former inhabitants.

Salvage in Jamaica Plain is rather sparse compared to other sites, but its location as one of the few southeastern settlements make it a good location for a Minutemen artillery piece. The area of Jamaica Plain that can be used to build is only a small portion of the overall ruined town. However, it's a rare settlement that is an actual town with architecture, not a place to build crude wooden shacks. There is no deep water, so simple water pumps must suffice. There are many line-of-sight breaks and natural walls, which combined with the smallish area, should prove easily defensible with some choice turret locations.

Jamaica Plain only appears in Fallout 4. 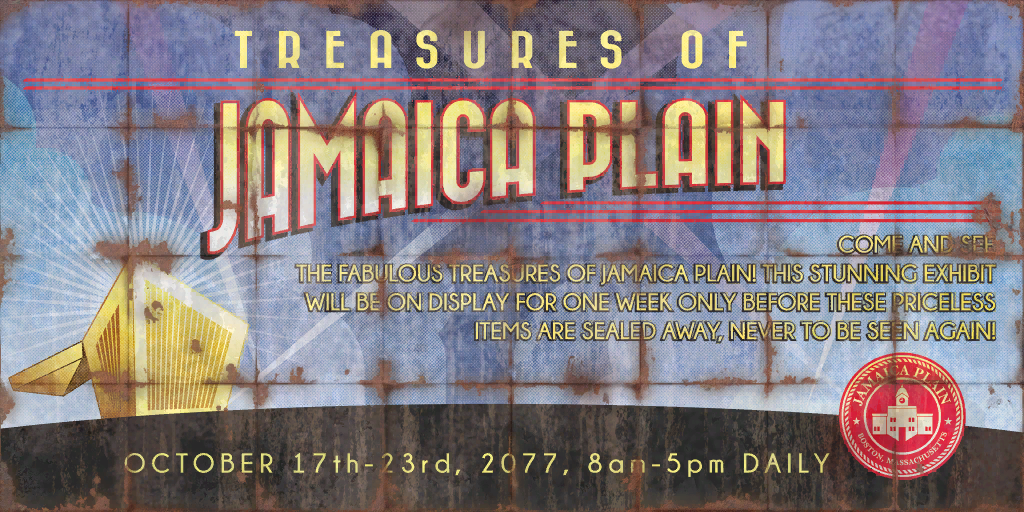