20% bonus on the critical hit table, can trigger an instant kill effect 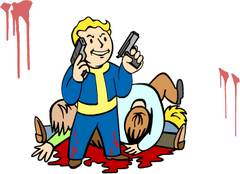 “The critical hits you cause in combat are more devastating. You gain a 20% bonus on the critical hit table, almost ensuring that more damage will be done. This does not affect the chance to cause a critical hit.”— in-game description, Fallout

With this perk, a +20 bonus is applied to the Critical Hit table roll, which effectively moves it up one table entry, ensuring a more damaging type of hit.

Scripts triggered by a critter's death do not fire upon "instant-death zero-damage criticals" (Pariah dog is one example). These can be prevented by also having the Living Anatomy perk which makes zero-damage attacks impossible. Allegedly, Bonus HtH Damage and Bonus Ranged Damage perks do the same.

“With the Better Criticals perk, you gain a 50% damage bonus every time a critical hit is scored on an opponent.”— In-game description

With this perk, the weapon's critical damage is increased by 50%.

This perk only affects V.A.T.S. criticals. If you're looking for an increase to your sneak critical damage, invest points in Ninja and (if you're using silenced weaponry) Mister Sandman.