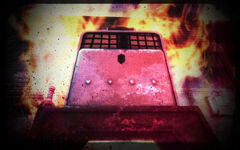 “Soon, pitiful worms! Soon I will rule, and your lives will have their doneness setting turned to... darkest!”

Toaster is an automated personality in the Big MT in 2281.

The Toaster in The Sink was ordered to go offline when Dr. Mobius left the Think Tank. His personality back-up is recovered from a "toaster altar" in The Cuckoo's Nest. The Toaster is psychotically violent, aggressive and megalomaniacal, bent on destroying the Earth with atomic fire. However, he is unaware atomic fire has already rained when the Great War began. When informed that the Earth has already been destroyed, the wind is somewhat taken out of his sails, albeit briefly, before he quickly returns to his "Burn the World" agenda by threatening to bathe the world in "atomic fire....again."

All My Friends Have Off Switches: The Toaster is one of the appliances that the Courier must retrieve a module for. The module is found in The Cuckoo's Nest, sitting on what appears to be a shrine for toasters and electric appliances.

The Toaster appears only in the Fallout: New Vegas add-on Old World Blues.