“These new inhabitants... not natives... most of them. Came with duty, purpose... ready to kill each other. The Divide was stronger. Left marks on them, too. Not Bear, not Bull - now... radiation's marked them, made them equal in history's eyes.”— Ulysses

Marked men are ghoul inhabitants found in the Divide in 2281.

Marked men are the remnants of the New California Republic and Caesar's Legion soldiers stationed at the Divide. The Courier unintentionally brought a package to the Divide from Navarro containing a mysterious ICBM detonator, causing the nuclear warheads that were still underground in their silos since the Great War to detonate. The result of the warheads exploding, on top of Big MT's man-made disasters such as the earthquakes and violent storms present there that were an experiment gone awry, soon tore apart the entire area and all those residing within. The storms in particular had a profound effect on the NCR and Legion remnants; their skins were flayed off, leaving their skeletal muscle tissue exposed. At the same time, the radiation had caused a unique "ghoulification" process that had kept them alive, making them suffer from their heavy wounds. In dialogue between the Courier and Ulysses, it can be confirmed that such injuries and radiation would have killed ordinary ghouls. This makes the marked men unique in that it is that level of radiation that is keeping them alive.

Despite belonging to completely different factions with opposing ideologies when they were humans, the pain united them both into a single group. Their hate for the NCR and the Legion was turned against the Divide and its intruders. Some former legionaries of Caesar's Legion crafted crude versions of Legate equipment closely resembling Lanius's gear, using the metal from the Divide. Others shaped crude blades as weapons, in hopes of holding on to their identity that the Divide had snatched from them. Former NCR soldiers held on to their guns, raining fire on their victims from a distance.

Marked men are hardened ghouls with a fiery red color, with their skins peeled off by the violent storms of the Divide. Because of this, their skeletal muscles are exposed, giving them their red appearance. They are considered ghouls, in that the intense radiation of their surroundings is keeping them alive. To protect their exposed bodies (or more likely, themselves), they continue to wear tattered clothing from their respective factions. They maintain their clothing with scavenged pieces of scrap, such as fallen road signs, license plates, and other bits of metal. In order to feed themselves, marked men have resorted to cannibalism, evident in the hunks of human meat and flesh found nearby their encampments.

Marked men level with the player, have a high amount of health for humanoid opponents, and are moderately protected by the tattered armor they wear (albeit far less than properly maintained regular versions of their armor). They are overall on par with the White Legs tribals of Zion Canyon, and the lobotomites of the Big MT, in terms of health and armor.

When near sources of radiation, they regenerate health rapidly, even more so than ordinary ghouls. However, they tend to be few in numbers, and it is rare to find more than a dozen in any particular location, unless the player is a high level.

Marked men hunters appear to be former NCR troopers, equipped with powerful ranged weapons. They may carry guns like trail carbines, assault carbines, or sniper rifles at lower levels (level 1 to level 30), and anti-materiel rifles, brush guns, or Marksman carbines at higher levels (level 30 or above). For energy weapons, they may be seen carrying arc welders or tri-beam laser rifles.

Most of them are found wearing ruined NCR trooper armor (now known as the marked trooper armor), while some of them may be wearing Legion armor (called the marked scout armor).

They wear either marked tribal armor or marked patrol armor, suggesting that they are a mix of former NCR rangers and former high-ranking legionaries. As such, they are slightly better protected than lower-ranking marked men.

Marked men ravagers appear to be former Legionaries, and specialize in melee weapons. They often carry the Blade of the West, as well as fire axes and Shishkebabs at lower levels (below level 30). At higher levels (above level 30), they carry sledgehammers, super sledges, and thermic lances. They also carry and use incendiary grenades.

Marked men scouts appear to be former Legionaries equipped with both firearms and frag grenades. They generally carry either pistols, one-handed submachine guns, or shotguns. They are equipped with flare guns and plasma defenders at all levels, and 12.7mm pistols, hunting shotguns, and hunting revolvers at lower levels (below level 30), as well as 12.7mm submachine guns and riot shotguns at higher levels (above level 30).

As their former ranks suggest, they usually wear marked scout armor. Some of them can be found wearing marked trooper armor.

Irradiated marked men hunters are marked men that have been irradiated from the missile launched by the Courier. They are found scattered around the Courier's Mile.

Irradiated marked men marauders are marked men that have been irradiated from the missile launched by the Courier. They are found scattered around the Courier's Mile.

Irradiated marked men ravagers are marked men that have been irradiated from the missile launched by the Courier. They are found scattered around the Courier's Mile.

Irradiated marked men scouts are marked men that have been irradiated from the missile launched by the Courier. They are found scattered around the Courier's Mile.

One irradiated legionary prime can be found in Dry Wells. He is the ghoulified remnant of a Prime legionary that has been irradiated from the missile launched by the Courier.

Irradiated legionary veterans are the ghoulified remnants of Veteran legionaries that have been irradiated from the missile launched by the Courier. Three are found in Dry Wells.

An additional, unused variant of the irradiated heavy trooper exists within the resources of Lonesome Road. Also called "irradiated heavy trooper", this version differs primarily in that it uses the default SPECIAL statistics for NCR troopers - 5 for all statistics. It also is equipped with a Minigun loaded with 5mm AP rounds, rather than the random weapon selection found in the standard version. Internally this version has the Editor ID NVDLC04NukeNCRColonel, indicating that this may have been an early stand-in for Colonel Royez.

Marked men who carry Plasma Defenders are given the incorrect ammunition, microfusion cell, over charge rather than the correct energy cell, over charge. This renders them unable to use the weapon entirely.[已验证] 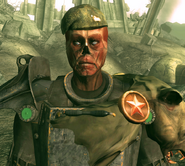