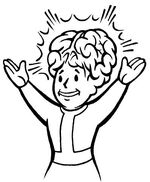 After being dipped in FEV vats, absorbing some other people and being connected to the LA Vault computer, the Master gained some psychic powers the extent of which is unknown. He was able to attack humans mentally, although his attacks could be repelled with proper training. 教主能以某种方式让被FEV感染的人类获得这些精神能力(usually the pineal gland, but also the Amygdalae or Medulla)，但是大部分这种实验通常因为实验体精神错乱而失败了，或是被用在使实验体产生突变方面。在教主家中有四个灵能者：