Ratslayer is a weapon in Fallout: New Vegas. It is the unique variant of the varmint rifle.

Ratslayer can fire a total of about 995 standard rounds, the equivalent of 125 reloads, from full condition before breaking. Template:Durability table

Varmint rifle - the standard variant found throughout the Mojave Wasteland.

Location in the Broc flower cave 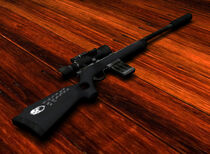 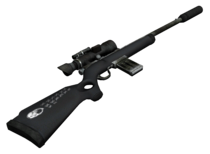