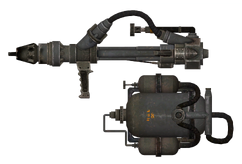 The flamer is a weapon that projects an ignited stream of flammable liquid, and is classified as a big gun in Fallout 3.

The flamer is by far the most effective big gun for close-quarters action. The flamer and its ammunition are fairly common, and can be found on any Mister Gutsy (and even Mister Handies) as well as in many stores.

The flamer can shoot a total of about 208 units of flamer fuel, the equivalent of 4 reloads, from full condition before breaking.