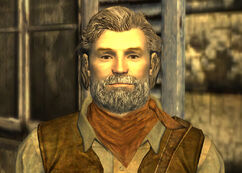 漢隆最喜歡坐在高爾夫營地那座度假大屋的二層陽台上。這名莫哈維廢土上資格最老的遊騎兵是第一次胡佛大壩戰役擊敗凱撒軍團的大功臣。Leading much of Joshua Graham's forces to ruin, Hanlon set the NCR's victory in stone by turning Joshua's minimalistic battle tactics against him, in which Joshua was unable to compensate. With most of his veteran forces already annihilated at the hands of both 1st Recon and the NCR Rangers, Joshua Graham and his Legion were quickly defeated at strategic locations on the Hoover Dam, and most of his foot soldiers were routed and killed. Afterwards, the NCR refused to listen to Hanlon's advice to destroy the rest of the Legion within the Mojave while they were weak, but was nevertheless honored as a war hero, and remains one of the most influential men in the NCR.

他在遊騎兵部隊已經服役超過四十年，取得過數不清的榮譽，在遊騎兵們之間擁有無與倫比的影響力。儘管由於年事已高，不再參加第一線的戰鬥，他依然留在部隊里發揮餘熱，用其他方式幫助遊騎兵們。鑒於他的巨大影響力，NCR的總統也需要聽取他的意見，將更多的遊俠從Baja地區調來莫哈維。His contributions and influence are seen spread across the Mojave, and those that are wise know not to attract his attention in the wrong way.

Return to Sender: It is discovered that Hanlon is falsifying field reports. Once discovered, the Courier can either let Hanlon continue with his plan, turn him in to the NCR authorities, or convince him that falsifying the reports is pointless and Caesar is dead (in the event of Caesar's death) or dying (by discovering his illness during the completion of Render Unto Caesar or receiving some information about it from Silus during Silus Treatment).

If the Courier turns Hanlon in, he will give a brief speech over the intercom before proceeding to commit suicide. A Ranger will exclaim "That shot came from the chief's office," and will run in, guarding the body. Hanlon's Ranger Sequoia will be on the ground next to him, but must be stolen.
The speech is as follows: