“Keeping watch on the river and looking for anyone trying to cross it. The Legion likes to send infiltration teams over on rafts.”— Ranger Pason

This ranger station was erected on the remains of a ruined farmstead, which is still visible. Ranger Pason is looking for Legion crossing the river. 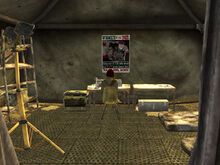 Cellar with a storage area, reloading bench, a bed and pool table