Ravens are creatures found in the Mojave Wasteland in 2281.

Ravens in the Mojave Wasteland have an almost identical appearance to ravens from before the Great War. They are one of the few creatures to be visually unaffected by radiation.

Ravens have distinctive black feathers and two frontal talons on their feet that resemble their pre-War counterpart. The raven's feathers also appear rattled.

They are not considered an enemy and will fly away if the Courier tries to get near them (approximately 10–15 feet). They can be killed if detected early enough, but there are no associated challenges for killing them other than those that involve killing any creature, such as Lord Death and I Dismember You. They will explode when shot, similar to how other characters will explode when the player character has the Bloody Mess perk, but Bloody Mess is not required for them to explode. Ravens are the weakest creatures in the game, and cannot be targeted using V.A.T.S. 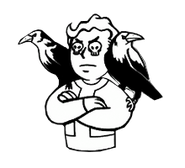