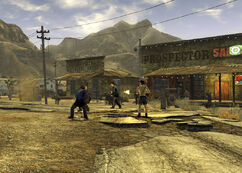 “Shit, yeah. Mayor Cobb - I like the sound of that. Running my own town will give me more pull with the guys at the prison, too.”— Joe Cobb

Run Goodsprings Run is a side quest in Fallout: New Vegas.

Two small dialogue options were cut from the quest, pointing to an additional task Joe would have asked the player character to perform: freeing the town's bighorners. While Joe's responses are not present, presumably, this would have been intended to create chaos in town. The option was likely removed owing to the presence of free-roaming bighorners in Goodsprings in the final release of the game, although Joe still mentions this when spoken to.