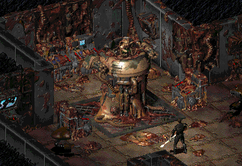 “Sorry, this isn't an option for you. Your race will die out after this generation.”— The Vault Dweller to the Master about his scheme to turn all humans into super mutants

Destroy the Mutant leader is a main quest in Fallout.

The Vault Dweller has trekked across the wasteland and brought the water chip back to Vault 13, but the mutant armies still pose a dangerous threat to the safety of the vault populace. It is up to the Vault Dweller to stop their mad leader, the Master, as well as the Forced Evolutionary Virus, from which they originate.

The seemingly peaceful Children of the Cathedral have, up until this point, been a helpful organization, with their free hospitals in Junktown, Necropolis and the Hub. Now, the Vault Dweller needs to enter the Cathedral's walls to discover and defeat the evil within.

The Cathedral is located two squares south of the Boneyard and with Katja being the only person able to mark it on the Vault Dweller's map, one may need to search to find it. Once there, go through a staircase in the back of the main room. However, the door leading to that room is locked. To get there, a red COC badge must be obtained. Most of the Children in the main room, like Lasher, will carry one.

Once the stairwell is reached, follow it down. However, another locked door blocks the path. Head up the stairs nearby and locate Morpheus on the third floor. The nightkin along the way up will be hostile to the Vault Dweller unless they are wearing robes, are unarmed and alone. Morpheus' death awards 1000 XP, and the black COC badge. Alternatively, he can be convinced to take the Vault Dweller directly to the Master (see Speech solution).

At the bottom of the hidden staircase, there is what appears to be a dead-end library. Searching the wall on the east side will reveal some intricate grooves. Lockpick or search the nearby bookcases for traps to reveal a lever and open a hidden passage. If it is after 8 P.M., there will be a centaur and two floaters out in the caves, along with two armed super mutants regardless of the time.

Enter the Los Angeles Vault. The first level is home to several more hostile super mutants the Vault Dweller will have to defeat to reach the elevator to get to the third floor.

Once there, the player character is attacked by several Mister Handies, floating eye bots, and more super mutants. These must be defeated before heading down the corridor to where the overseer's chair would be.

As the Vault Dweller walks down the corridor, they will get progressively worse messages in the message box, as well as taking Eye Damage, losing 2 points of Perception and Intelligence each by the time the far side is reached. At the very end lies the Master. If the player has the Mental Block perk or a psychic nullifier from one of the psykers on the second level, they are immune to the damage.

The Master is a very powerful foe, with twin (although dealing damage as one) Gatling lasers, support from two floating eye bots and a contingent of super mutants. Defeating him will result in 10,000 combat XP.

Once the Master is gone, the entire Cathedral begins a self-destruct sequence; at which point a timer will come into effect. If the Vault Dweller does not make it out in time, they will die. As when the Vault Dweller blew up the Mariposa Military Base, make sure to leave the map. Simply being outside the building won't count as having escaped.

If the Vault Dweller does not want to kill the Master in combat, he can also be talked out of his plans for the Unity. The Vault Dweller can convince him to stand down with the use of a very high Speech skill.

Alternatively, he can be confronted with a slightly lower Speech skill and Vree's autopsy report. The Vault Dweller must have an Intelligence skill above six to obtain the tape from Vree. Once they read the holodisk, they can show the Master that all mutants are sterile. He will be unable to cope with the things he did in the name of the Unity, which he now knows to all be in vain. He will then tell them to leave "while you still have hope" and to find safe ground. He will commit suicide by detonating a nuke beneath the Cathedral.

If the Vault Dweller has either the Lieutenant's key from Mariposa Military Base or a very high Science skill, that same nuke may also be used by the Vault Dweller. Get to the third level, but take a left once the intersection is reached. There will be a few more super mutants and an elevator behind them. Enter that elevator. Two mutants guard the nuke and once they're taken care of, use the key to set the nuke for a four-minute countdown. Be careful, if the Vault Dweller is still on the Cathedral map when it goes up, they go with it.