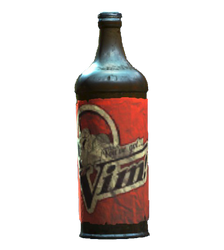 活力汽水股份有限公司建立於1931年，最初為藥物專利。It wasn't as popular as Nuka-Cola, however產品只在緬因州被地方市場認可。Vim was even referred to as a state tradition 並有望成為緬因州代表飲品； however, during the process of making this official, legal situations forced the company to back off its marketing.

核口可樂公司 was going to對活力汽水的併購before the war。公司為里德家族經營for years，現任執行長多由·里德面臨核子可樂的收購問題。However, with certain financial problems being caused by the company's legal issues, the CEO was being urged to sell the company. The only legal entanglement that the public was aware of consisted of a male employee of the Vim! Factory allegedly punching a female bar patron, though many witnesses denied this. Still, the local news attached to this story and forced the company to hold back on television advertisements and product release.

One successful form of marketing which continued despite these problems was 讓員工駕駛塗裝了的t51來作為宣傳的活力大使。Two sets of such armor are available: one in Vim! Paint at the Vim! Pop factory next to the terminal where the paint schemes can be downloaded, and another in Vim! Refresh Paint in a truck along the coastal road north of the National Park visitor's center.

A combination of pure Maine spring water and other extracts and syrups, the flagship beverage of the Vim! Pop corporation is slightly fermented, which helps to better bring out its unique and natural flavor profile.[1]

活力汽水, as well as its logo design, 背後的原型也叫活力(Moxie)，緬因州的官方碳酸飲料。Moxie進入美國人民的英語詞典，意為精力，勇氣，與vim是近義 (e.g. 'Vim and Vigor') based on the advertising for the soft drink in the 1930s. 與活力汽水一樣，Moxie最初的定位也近似保健產品。