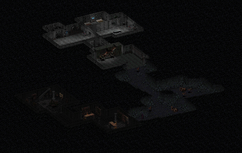 "Flame of the Ancient World"

Play sound
Flame of the Ancient World LA Va…
“Within a dark and forbidding Vault, where the walls dripped with human flesh, and the screaming of dying echoed through the halls, I found many evil creatures and mutants.”— Vault Dweller's memoirs

The vault is located south of Vault 13, in the southern district of the City of Angels, beneath the Cathedral.

The entrance to the shelter goes through a small cave, linked to the Cathedral's basement. Upon entering, differences from standard vaults are evident: the airlock is much smaller, the EML-2 room is designed with additional windows, and the main hall is one large chamber.

During the Master's reign, two nightkin stood guard at the entrance at all times.

The second level also differed in layout, with the elevator located to the side, not in the center. It is possible the supermutants made alterations to the original design. In 2161, the second level housed a chapel, barracks for supermutant guards, a large research lab where mad scientists worked on awakening the psionic potential in humans, and the psyker holding cell and test subject cells.

The third level housed the heart of the Unity. Here, apart from the most elite nightkin detachment and their leader, Viscious, the Master resided, united with the overseer's command chair. It is here that the elevator to secure storage is located.

The deepest level of the demonstration vault was where the Master kept his ace-in-the-hole weapon. Should the Unity face an enemy it would not be able to defeat, the supermutants would deploy one of the last few remaining nuclear warheads against them. For security reasons, the key to the console was kept in the possession of the supermutant Lieutenant.