Zeta is one of two known alien motherships orbiting Earth in 2277. It has been observing the planet for over 600 years.[1]

A mothership uses the finest alien technology and possesses both offensive and defensive capabilities. It is protected by shield technology and its main weapon is a powerful raygun cannon named the death ray (this device, when used on Earth, resembles the power of a nuclear warhead), which connects to the lower section and can be used for both orbital strikes on a planet and combat against other space vehicles.

Passages between the various sections can be made faster with teleportation matrices installed in key points of the ship, which can be turned off in case of internal problems by the captain of the ship. It also possesses a large number of healing archways placed in all sections, that will heal and remove all radiation of anyone who walks through them.

A mothership also contains various laboratories for experimentation on living beings and technology such as biological research, experimentation labs, and research labs. There are also a vast number of storage facilities in which items retrieved from a planet below are stockpiled, and abducted species are kept alive or are frozen for preservation, used for experimentation or targets for weapons. Many of the subjects (Living specimens) are mutilated in the process of the Zetan's "Research".

Aside from living quarters for the crew and the bridge, the remainder of the vessel is dedicated to the ship's basic functions. The engineering core in the lower part of the ship provides access to most of the maintenance sections like the maintenance level, engine room, or waste disposal. In the robot assembly, the various alien drones are produced and repaired. Death ray control and death ray hub are dedicated to controlling the mothership's main weapon. A mothership also features its own hangar in which other smaller alien ships can be stored and maintained.

Zeta appears only in the Fallout 3 add-on Mothership Zeta. 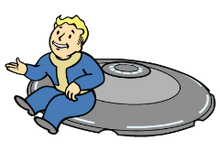 As depicted in This Galaxy Ain't Big Enough...