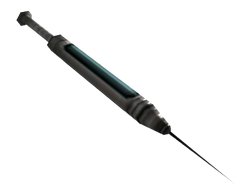 Med-X is a highly potent painkiller which, when injected, makes the user impervious to pain to the degree that Damage Resistance is increased by 25%. This will last for 6 minutes, or 12 minutes with the Chemist perk.

Originally, Med-X was named "morphine" in the game. However, on July 4, 2008, Fallout 3 was refused classification by the OFLC in Australia, thus making the game illegal for sale in the country due to the "realistic visual representations of drugs and their delivery method [bringing] the 'science-fiction' drugs in line with 'real-world' drugs." On September 9, 2008 Bethesda Softworks's vice president of PR and marketing, Pete Hines, described the idea of the Australian version of Fallout 3 as a misconception, and said all versions of Fallout 3 will not include real-world drug references. However, the name "morphine" is still used in the Japanese and Czech versions of the game.