“Broke legs'll slow you down!”

Swampfolk are a type of mutant human located at Point Lookout in 2277. Although hostile to the Lone Wanderer whenever encountered, there is evidence that they are capable of trade with some of the local merchants. Their physical deformities are the result of inbreeding, coupled with radiation or exposure to other toxic wastes in the Point Lookout area and the various pollutants washed down the river from the north.

Although Point Lookout did not suffer a direct hit during the Great War, the effects of the radioactive fallout can be seen in the indigenous population that have slowly degenerated over the decades, and have since created a signature "Point Lookout look." Sporting sinewy, pockmarked bodies oozing with strength and pus, the swampfolk are a violent and stupid bunch, and they don't take well to strangers. They have a rudimentary belief system and mark their territory with fetishes: straw dolls hanging from trees and bone totems. Anthropologists have speculated the swampfolk have a belief in the occult, and some postulate they pray to a hitherto unknown entity named Ug-Qualtoth.[1]

“The Swampfolk denizens of Point Lookout are the product of exposure to heavy radiation and generations of poor breeding.”— Fallout 3 loading screen, Point Lookout

Products of radiation and incest (although there are no female swampfolk shown), the swampfolk all act, look and sound like stereotypical "hicks," from the odd ways they walk to their vocabulary, such as "There you is!" and "I gonna kill you!" Further reasoning for the swampfolk's mutation is recorded on the medical terminal in the administration tent at the disaster relief outpost; suggesting the New Plague has affected the population.

They are very territorial, and they are hostile to outsiders. Areas in which they live are all decorated with bones, strung-up dolls, teddy bears and mannequin heads (scavenged from Pilgrim's Landing). These decorations serve as both a warning to outsiders and as a part of their own religion, which is based on worshiping unknown deities.

Swampfolk carry out bloody rituals at the sacred ritual site. The Krivbeknih, a book believed to possess an occult power, is kept there as a holy artifact.

Swampfolk usually attack in groups of two to five. They are territorial, and even though they are marked as enemies in the HUD, they do not actually become hostile until the player character gets too close to them or shoots at them. However, the range at which they become hostile is quite far, more than one hundred feet.

Usually, the groups will consist of at least one melee attacker, which is often the strongest of the group, who charges while the others behind them attack with firearms.

They can set a trap for player characters looting the basement of the trapper's shack. The trap consists of frag mines surrounding the entrance to the basement and a number of hidden swampfolk.

Bruisers and trackers shield their faces with their mutated arms when charging, making a clean headshot difficult. Despite this, V.A.T.S. may still display 95% as the calculated success chance.

Brawlers are large, but not as large as trackers and bruisers. They wear clothes that actually fit them, which is overalls and an orange shirt underneath. It is safe to say that brawlers are the most "normal" looking of the swampfolk. They are tougher than scrappers, but somewhat weaker than creepers, and are roughly on par with a super mutant brute in terms of durability and skill.

Bruisers are stronger and have substantially more health than trackers and, like creepers, are covered in blood. They wear a very bloody "Bill's" mechanic outfit, with the "Bill's" tag still readable. Like trackers, they engage only in melee combat and use axes. Like the tracker, even when unequipped, they can still inflict large amounts of damage with only their fists. In fact, bruisers have an even higher unarmed damage rating than deathclaws. They also punch very fast, making blocking very difficult. Like their tracker cousins, they are slower than deathclaws or feral ghoul reavers, and lack ranged attacks. Likewise, their exposed bellies bear stitches, suggesting that the swampfolk have at least some medical capabilities.

Scrappers are the smallest and weakest of the swampfolk. They're skinny with distended bellies and only wear pants. They have somewhat more health than regular super mutants. They also appear to have the least amount of mutation/disfiguration on their skin and body (excluding their body structure) compared to the other swampfolk of Point Lookout.

Trackers are very large swampfolk (standing roughly seven feet tall) who use axes to attack strangers in close combat. This class of swampfolk will either attack the Lone Wanderer in hand-to-hand combat or use melee weapons, like axes, due to the fact that trackers have extremely swollen or clubbed fingers. This means it would be nearly impossible to fit their fingers into a firearm. They run with a hop to their step and are very strong and durable. Like the bruiser, even when unequipped, they can still inflict large amounts of damage with only their fists. Trackers are not strongly affected by the dart gun, as even after having their legs crippled they can still run at close to their normal speed. Also, while they run, they show at least a small amount of intelligence (or at least instinct), as they put one of their swollen arms in front of their face, making it harder to score a headshot in V.A.T.S. They can survive somewhat more damage than a deathclaw or sentry bot, but are slower than deathclaws and also lack ranged attacks. They also have stitches on their stomachs like the bruisers. Their iconic walking (or rather tip-toe) animation is an exaggerated interpretation of a hunter "tracking" its prey. 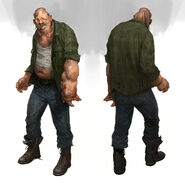 Player combat with a tracker