The Boston Bugle was a pre-War newspaper published in Boston.

This paper was founded over fifty years before the Great War. Buster Connolly, Mags Veccio, and Tim Stahl wrote award-winning columns for this paper. 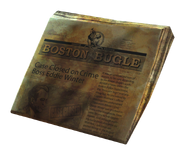 Ad from the Art of Fallout 4

Ad painted on a wall in Boston