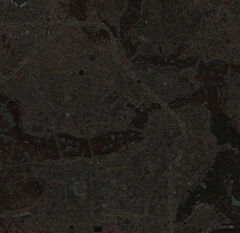 Boston was the capital city of the former state of Massachusetts in the New England Commonwealth until the nuclear holocaust of 2077.

The downtown core of Boston is one of the most chaotic areas featured in the Fallout series. The streets are fought over between various raider groups, Triggermen gangs, super mutants and even the occasional group of Gunners. This produces frequent bursts of gunfire and explosions. It can be difficult, especially at an early level, to find a safe route through the city. Direct confrontation of the various groups can make for slow progress. However, Boston is unique to the series in the amount of vertical space. Often finding a safer route is a matter of looking up. However, the elevated rooftops are not entirely safe. There are Gunners and super mutants on or near the elevated highway which cuts through the financial district.

As one of the birthplaces of American independence, Boston features countless major landmarks, including Bunker Hill, Massachusetts State House, the Old North Church and many, many more, complemented by remnants of American corporations, such as the Mass Fusion Building. Unlike many other cities, Boston also features a vault in the form of Vault 81, found at the westernmost limit of the city. Though it suffered due to the passage of time, it became a prominent settlement by the year 2287. The much larger Vault 114, located in the Boston Common via the Park Street station was not completed by the time of the war.

Post-War, the Commonwealth has been described by Dr. Zimmer as "a war-ravaged quagmire of violence and despair." However, the Commonwealth (which includes Boston) seems to be one of less devastated areas in the post-War USA, so Zimmer's impression seems to be primarily based on the fact that he likely grew up inside the Institute, where the standard of living is much higher.

The city center is composed of several tall skyscrapers though they have been worn with time. As of 2287, many pre-War buildings, monuments and landmarks still stand. Some have been renovated with scavenged parts, their ramshackle appearance suggesting that central Boston may have partly tried to defend themselves against a nuclear attack in some way, as Robert House did with Las Vegas.

The areas outside the city center are rolling barren plains, wastelands, swamps and what's left of suburbs. To the southwest of the map, there is a growing appearance of radiation leading to the Glowing Sea. The terrain is bumpy and is scattered with pockets of high and low radiation levels. Small collectives of irradiated water scatter the area. Information in the game indicates a high-yield nuclear warhead detonated to the southwest of Boston. This is supported by the Pip-Boy map, which shows part of a circle at the bottom left which appears to be the crater the nuclear warhead created. As to if Boston was the intended target or not remains unknown.