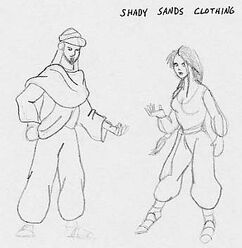 Some people in Shady Sands say that they are the followers of Dharma. In our world, dharma is a Sanskrit word roughly translatable as "law" or "the way", and, for practicing Buddhists, dharma is used to mean the teachings of the Buddha.

Aradesh says that Dharma was a great religious man. It is unknown whether he means Buddha or some other pre-War or post-war religious leader of some new dharmic religion. Characters who reference Dharma in the game are Aradesh, Agatha, Seth and Katrina.

Dharma is mentioned only in the first Fallout.