Farragut West station is a real metro station in Washington D.C., although its location is farther inside the D.C. area. 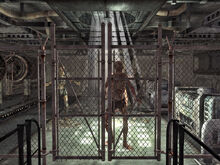