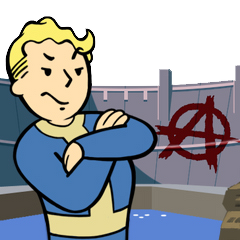 Complete No Gods, No Masters
15

“Hell. Can't believe we got suckered by some road jockey. Should've watched the flank while Caesar's best was making all that noise. I know what those robots of yours can do on a bad day, and I'm not eager to toss lives at them just to make a point. But if you're taking this place, you better hope you can hold it. I'll give my superiors my opinion, but I don't think they're going to listen. So if NCR comes at you, and it will, pray you're ready. I promise you, our situations reversed, I'd see you hang.”— General Oliver

No Gods, No Masters is an achievement/trophy and final main quest in Fallout: New Vegas if the Courier chooses to side against the three other main factions (NCR, Caesar's Legion, and Mr. House) and go it alone, by using Yes Man to help them to fight for an independent New Vegas. Ensure that one has gone to the underground bunker and upgraded the Securitron army prior to talking to Yes Man at the conclusion of Wild Card: Finishing Touches.

Yes Man's Securitron army will take Hoover Dam and the Courier shall establish themself as the de-facto ruler of a fully independent New Vegas Strip.

After telling Yes Man that they are ready to go to the dam, the Courier will start this quest on the western end of the dam with a Securitron.

As the Courier walks forward they will see the large turret to their right explode and will see four or five NCR troops ducking behind sandbags while fighting the Legion. One can then sneak past them all, kill them all, or kill just one side or the other. There are several legionaries coming from the eastern side of the dam and from the drainage towers to the left as one crosses the dam. There are some NCR snipers on top of the dam towers to the right. After crossing the dam, the Courier will have to enter the last tower to the right and use the elevator to descend to the Hoover Dam offices.

After entering the offices they will encounter two NCR heavy troopers armed with heavy incinerators burning four legionaries cowering away from them. The player character can kill both the legionaries and the NCR troops, sneak past them, or convince the NCR troops with a Speech check of 75 during dialogue. Afterward, install the override chip into the large terminal with several screens attached to it, at the end of the room. Yes Man will contact and inform the Courier that they have two options:

Neither of these options will affect the ending. After choosing either option the Courier will have to run through the halls, where more legionaries and NCR troops will be fighting each other. The Courier can sneak past them all, kill them all, or kill just one side or the other. To get from the control room to the manual override switch, turn and follow the hall to the left after exiting the control room, then turn to the right down the next hall and go to the end of the hall and turn to the right and open the door to a balcony overlooking one of the dam's eastern plants.

As the Courier crosses to the eastern end of the dam they will see fires burning at Fortification Hill, if they decided to activate the Securitron army. Several more legionaries will be coming from the power output towers to the left and from the eastern end of the dam and they may try to take cover behind the sandbags, there are also some NCR snipers on top of the towers, including the tower the Courier came out of.

If one completed the quest Volare! and helped the Boomers, they will fly the restored B-29 over the dam and bomb a number of the Legion troops. If you completed the quest For Auld Lang Syne and told the Enclave Remnants to assist the NCR against the Legion, they will fight by the Courier's side, if the NCR is not hostile towards the player character, but if the NCR is hostile then Cannibal Johnson will attack the Courier making it very likely that one will have to kill them all, except Daisy Whitman who flies away inside the Enclave vertibird. If one decided to activate the Securitron army, then they will have several Securitrons to assist them in the battle. After crossing to the eastern end of the dam, one will have to cross the bridge to the right and follow the path to the gate leading to the legate's camp. The path has more legionnaires coming from the legate's camp to kill or sneak past.

Follow the path down the hill from the gate and enter the legate's camp to the right. Inside the legate's camp are praetorian guards and legionaries to kill or sneak past. Go up the hill to meet Lanius and either kill him and his legionaries in a duel or convince him to surrender with numerous Speech checks of 55, 65, 75, 85 and 100. The Barter check will ultimately result in combat. After making either decision, go back to the gate at the camp entrance and the Courier will be confronted by General Oliver, six NCR Veteran Rangers. The Courier has the choice to kill them, convince the NCR to leave, or to request that Yes Man throw Oliver off the Hoover Dam.