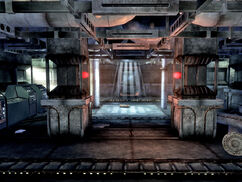 “They've holed up in the nearby metro tunnels. They're living with packs of feral ghouls. They've barred the main entrance. Go through the train yard.”— Gustavo