All My Friends Have Off Switches
Influencing People
Old World Blues 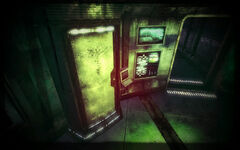 Sink Auto-Doc is an Automated Personality found in the Sink in 2281.

The Sink's Auto-Doc is a prototype Auto-Doc built by Dr. Mobius before he left the Think Tank and all of The Sink's systems were disabled. When its personality back-up is recovered from the Y-17 medical facility, the Auto-Doc speaks in a stereotypical 1940s military drawl. When inactive, the unit may snore loudly, ramble on about patient injuries such as 'shoe lung' while 'asleep,' or make passing comments on the Courier's general health.

The Auto-Doc was responsible for removing the Courier's brain, a procedure that would normally result in its subject becoming a lobotomite. However, due to the cranial injury from being shot in the head, the Auto-Doc was forced to adjust the operation routine and was successfully able to perform the intended operation.[1]