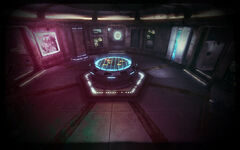 “Perhaps sir would like to put sir's feet up, and I might serenade sir with the dulcet tones of a light opera?”

The Sink Central Intelligence Unit (SCIU) is an automated personality[1] operating in the Big MT in 2281.

The Sink Central Intelligence Unit is the voice command computer responsible for the Big MT's data storage. It can act as a merchant and repairman when in the Big Empty. Once his personality back-up is retrieved from Dr. Klein and re-integrated into the system, the SCIU speaks with a stiff, overly-verbose and faintly British accent, in the manner of a stereotypical butler or personal valet. Out of conversation, the SCIU may make passing remarks about the Courier, offering suggestions of rest and/or refreshments and the like.