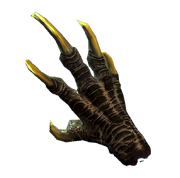 “No creature represents the danger of the Wasteland as much as the Deathclaw, which uses razor-sharp claws to rip apart its prey... in seconds.”— Fallout 4 loading screen

Deathclaws are highly dangerous creatures found in the Commonwealth, on the Island and in Nuka-World in 2287.

Deathclaws are tough and formidable melee combatants. Their appearance is also more detailed compared to their Fallout 3 and New Vegas predecessors. They have darker, scaled skin, longer horns (which seem to curve more downward rather than upward), shorter claws and a more draconic, reptilian head and face. Close inspection of their feet will reveal what appears to be a single enlarged toe claw on each foot, similar to prehistoric raptors.

The deathclaws found in the Commonwealth are more physically dynamic, showing abilities such as running on all fours when in combat or climbing obstacles, behaviors never seen in the deathclaws of previous titles. Deathclaws can be found anywhere in the Commonwealth, but appear more frequently in the Glowing Sea. When observed from a distance, deathclaws can be seen throwing dirt over what could be egg clutches. They are also known to perch atop hills, rock outcroppings and boulders surveying the landscape.

Deathclaws are the results of a pre-War experiment that involved creating a mutation of the Jackson's chameleon, along with several other species, to use as weapons on the battlefield. They are strong, agile predators that will attack enemies on sight. Their long, sharp claws are capable of inflicting great, oftentimes deadly, amounts of damage, hence their name.

Deathclaws have a very high amount of health for creatures of their level and are incredibly resistant to most damage types, particularly energy damage. Their hides have been known to reflect lasers when fired directly at them. Their versatile combat style makes them a formidable opponent even at lower levels. When aggravated, they will initiate combat by roaring and stomping the ground, causing a shockwave.

While they predominantly use their namesake claws for dealing damage, they may also headbutt their foes to stagger them. Their power attack comes in the form of a wide-swinging claw slash that deals significant damage. Deathclaws are known to use both hands to throw nearby cars at opponents that are out of melee distance.

Deathclaws have the ability to instantly kill the Sole Survivor or other humanoids, either by grabbing and smashing them into the ground, stabbing them, or decapitating its foe with its claws. This maneuver only occurs when the Sole Survivor has low enough health, although this is relative as higher percentages of health at a low level can still result in the instant-kill attack. At higher levels, it may not occur until the player character has very low health. At other times, the deathclaw may pick up the player character and slam them into the ground forcibly, causing moderate damage. The instant kill can also be nullified by wearing any type of power armor. Instead, the deathclaw will grab the Sole Survivor and stagger them, draining their AP completely. A deathclaw will also toss sand into the air to provide a brief distraction.

The deathclaws have a substantial level of natural armor and are resistant to damage on their dark, scaled parts, leaving the belly as a weak spot that takes increased damage. However, due to their hunched posture, this area is difficult to hit. The Penetrator perk allows the Sole Survivor to hit the deathclaw anywhere while using V.A.T.S., even if the belly is obscured by other body parts or even walls. They can dodge gunshots and zigzag while charging the shooter, making them even harder to hit. If one of their legs becomes crippled, a broken bone can be seen stabbing out of the skin, and they will move slowly. With both legs crippled they are unable to move at all. It is also possible to shoot off the end of their tail.

Their model size makes them ungainly on uneven ground, which can be used against them. Their inability to climb or jump (aside from scripted events such as in Concord) renders their close-combat style useless if attacked from high enough ground. If they cannot find a path to their opponent, they will flee and hide behind cover until their target is reachable again. Many of their attacks can also be avoided by keeping a constant pace, which allows the player character to simply outrun their claw strikes.

The variants that can be encountered are based on the player character's level. Different variations become increasingly more common with higher levels. For example, where one might expect to encounter a normal deathclaw at lower levels, they might encounter an alpha deathclaw once they pass a certain level. The higher the player character's level, the more chance of the next difficulty of deathclaw to spawn in its place. Scripted encounters, such as on top of Haymarket Mall and at Lynn Woods, have a higher chance of spawning a next-stage deathclaw than randomly-encountered wasteland ones.

Normal deathclaws, defaulted to level 22, are highly dangerous for those poorly leveled and still present a challenge at higher levels. Deathclaws will charge the target while defending their weak belly with their head, making it difficult to land a shot to the weak spot even in V.A.T.S.

The glowing deathclaw is a highly irradiated version of the standard deathclaw. A green light emits from the skin between their scales, and they inflict radiation damage on top of their massive ballistic damage. They can start spawning in as low as level 25, replacing several of the randomly encountered varieties including those above Haymarket Mall and Robotics Pioneer Park.

Matriarchs, as the name implies, are the female leaders of the species. They have less health than an alpha, but more than a normal deathclaw. Their horns curve out and down, compared to the alpha's forward and up. They start to appear when the player character is around level 35, and will replace some randomly encountered deathclaws in the wasteland.

A scripted savage deathclaw may potentially be found in the Museum of Witchcraft. This event is leveled and part of a side mission. The Sole Survivor can choose to fight but can also run away or sneak through it. If the player character has a high enough level, they may encounter savage deathclaws in random encounters, such as within the Glowing Sea or near Natick Banks.

The albino deathclaw is a pale version of the deathclaw, with more health, that can be encountered after reaching level 71. This deathclaw type's high health can make it a worthy adversary and it will only lose 1/4 of its health from a shot from the Mysterious Stranger.

The chameleon deathclaw will begin to spawn at Level 81. Its default color is a slightly more sandy tone of a regular deathclaw, but when aggravated, it will display vibrant colors depending on its movements in battle. It flickers between stone gray, acid green, red, orange and teal. When killed, its body retains the last color it was displaying.

Mythic deathclaws are the highest non-legendary tier of all deathclaw variants and can be encountered starting from level 91. On rare occasions, they can be encountered from level 75, though bugs have caused them to spawn as early as level 24 outside of the Starlight Drive In. These level with the player character, so they are immune to the Wasteland Whisperer perk.

Deathclaws can be encountered anywhere in the Commonwealth, but some locations are more frequent deathclaw hunting grounds than others. Below is a list of possible deathclaw locations:

Deathclaws appear in Fallout 4 and its add-ons Far Harbor and Nuka-World.

The deathclaw model was made by Jonah Lobe.[1] Lobe was planning to leave Bethesda Softworks before Fallout 4 was shipped, and had already created models for bloodbugs, mole rats and super mutants. The design team was not entirely sure if deathclaws would even be in Fallout 4 during a certain stage of development. Because there were no plans for who would be making deathclaws, Lobe decided to make the most of his remaining time at Bethesda, because he believed he would not be able to forgive himself if he had left and someone else created the model, passing up the opportunity to design such a terrifying creature for the new game.

Lobe started working on a model in ZBrush from home, referencing his deathclaw models from Fallout 3, while also taking inspiration from lions for their eyes. Lobe showed the model to Todd Howard when it was about 70% done, and Howard gave him the go-ahead to finish it. Two days later, Howard returned to Lobe's office cube and informed him that they were restructuring the demo to include a final power armor versus deathclaw battle, which became part of When Freedom Calls in the final game.[2]

The friendly deathclaw when returning the egg in The Devil's Due

The Sole Survivor's view when being picked up by a deathclaw 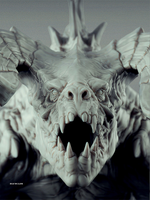 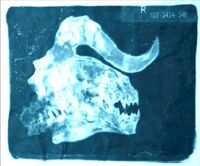 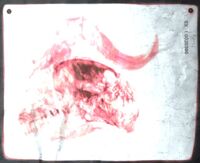