“A pair of sturdy rubber work boots. They'll keep the sludge out, at least for a while.”— In-game description

With these old wading boots, you can walk on puddles of toxic waste safely until they melt. They do nothing to insulate the player character from electrically charged floors however.

In Fallout 2, the boots help greatly in the toxic caves, where puddles of waste are plentiful. 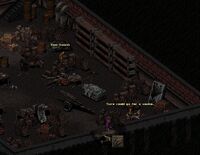