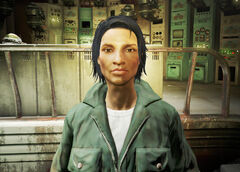 Isabel Cruz without the Mechanist's armor and helmet

“Now you'll face the full might of the Mechanist, my righteous robots will end your tyranny once and for all!”

Always talented with robotics, Isabel Cruz descended from a settlement plagued by raiders and super mutants.

Inspired by drawings of the comic books and radio show character, the Mechanist, Isabel decided to use her skills for the betterment of the Commonwealth. 來到聯邦尋找通用原子工廠，並從未料到自己能夠找到全力研發機器人的軍事基地。 但是她仍然覺得自己做了最好的選擇。她打造了很厲害的機器人，希望能拯救聯邦，然而由於機器人分析拯救聯邦人類成功率很低，不如殺死人類以解決他們的痛苦，導致她放到聯邦的機器人反而危害人們的安全。 This led to an attack on Ada's caravan, resulting in their call for help across the Commonwealth.

She created the Mechanist persona due to her social ineptitude.

If Restoring Order is finished peacefully, Isabel will remain at the Mechanist's lair.

The Mechanist appears only in the Fallout 4 add-on Automatron.

Isabel and her defeated robots